This carob banana pudding is so simple and fast to make. It is a delicious dessert filled with the health benefits of carob, banana, and peanut butter. Like all my desserts, there is no refined sugar in it. This pudding is sweet because of the banana and the carob so it is a healthy dessert. 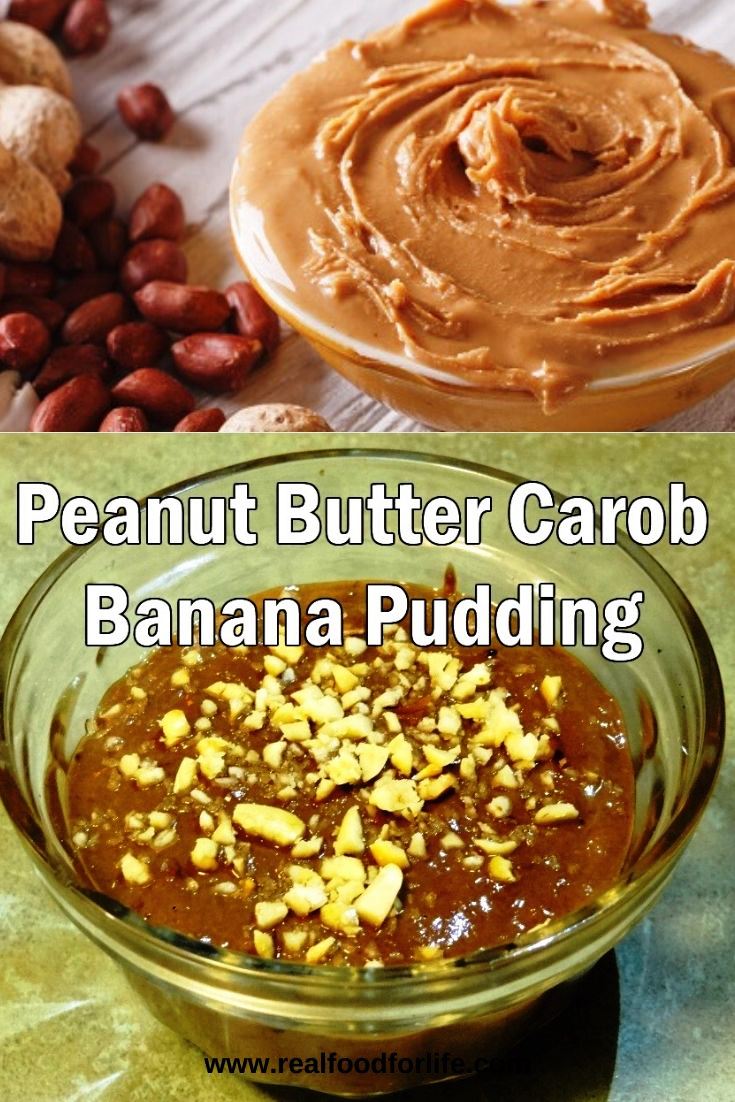 Carob is a sweet-tasting food that has a chocolate type flavour but is not chocolate. For those who cannot eat chocolate, this is a healthy alternative. I love carob anything.

Bananas are healthy for you and that’s a good thing since they are the most popular fruit in North America.  Everyone loves bananas. There are more songs, jokes, and silliness with this food than with any other plant on earth. Bananas are a healthy superfood! 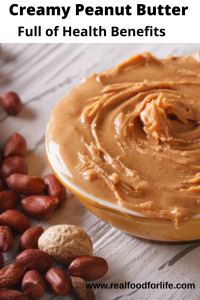 It is high in protein and healthy oil which can help with diabetes, weight loss, and Alzheimer’s disease.

No food is perfect, though; there are some cautions with peanuts. Hopefully, you are not one of the 1% that is highly allergic to peanuts.

Make sure you are using good peanut butter. Read the label. Natural, old-fashioned organic peanut butter with no hydrogenated fats and sugar is the best.  Choose peanut butter that contains only peanuts and salt. This kind is full of peanut flavor and doesn’t contain additives and is better for the environment too. Refrigerate it and turn it upside down in the fridge so the peanut oils and solids can re-mix.

This is good peanut butter with no unhealthy additives and is organic too: Smucker’s Organic Creamy Peanut Butter

I am a big fan of chunky peanut butter cause I like the crunch: Smucker’s Organic Natural Peanut Butter-chunky which is what I used in this carob banana pudding.

Note: this recipe uses ripe bananas so serve the same day it is prepared.

Raw Carob Pudding– I was inspired to make this for my friend Edward; he eats 100% raw food and loves carob. The first try I made was good but not as good as I knew it could be so this second try is delicious.

You don’t need a recipe to spread peanut butter on bread or celery, but the following recipes go way beyond that!

Peanut Butter Bliss Balls These are an old favorite of mine developed during my hippy days in the 70’s. 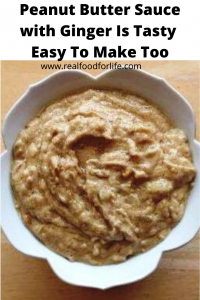 Peanut Butter Sauce with Ginger  – This is one of those life-saving recipes when unexpected guests arrived. I love this peanut butter sauce, the ginger makes it extra delicious.

More Healthy Tasty Puddings For You

Cherry Vegan Pudding – This cherry pudding is so easy to make and great for a hot summer day as it is raw.

Pumpkin Pudding – Vegan & Gluten free – This pumpkin pudding tastes great by itself or you can also put it in your favorite pie crust making ‘Pumpkin Pie’. What I love about it is that it is vegan and that means no cow’s milk. Also, it is refined sugar-free and full of delicious superfoods. Pumpkin is the main superfood in this recipe which is full of health benefits.  Also, it is easy to make.

Indian Pudding is Traditional, Vegan and So Yummy – This traditional Indian pudding is an old favourite of mine that I make vegan. Indian pudding is not the most beautiful of desserts but it is for sure tasty. Some people like to call it Native Indian but it seems like Indian pudding is the name for it still all over the internet. Cornmeal is the main ingredient in this pudding. It is a delicious gluten-free grain that has been around for centuries.

Dragon Fruit Chia Pudding with Raspberries -This is a delicious chia pudding which of course vegan and sugar-free as all the recipes on Real Food for Life are and I have to say delicious too. It is a very healthy dessert made from the tasty superfoods dragon fruit, raspberries, flax seeds, stevia and chia seeds.

Luxurious Brown Rice Pudding – This brown rice pudding and the creamy sauce that goes with it is sugar-free, dairy-free, and egg-free and it tastes great! It is a favorite dessert of mine that has gone through many changes throughout the years.I often do not even bake it; just cook it on top of the stove in a pot until it is the consistency I like

Deluxe Quinoa Pudding (vegan & gluten-free) –This is an extra special quinoa pudding made from my favorite grain that as we now know is really a seed. You can simply cook it on top of the stove in a pot till it is the consistency you like,  but baking it makes it extra yummy!

Delicious Vegan Banana Pudding – another vegan dessert that is very quick, easy to make dessert and without any unhealthy added sugar.

Chia Pudding with Wild Blueberries is Vegan Keto and Yummy – This is a super easy creamy vegan chia pudding with wild blueberries. It is paleo and keto friendly too. The use of chia seeds makes if very filling and nutritious.
You can use frozen blueberries. Talk about a fast way to prepare pudding; it took me only 5 minutes to prepare.

Easy to Make Yummy  Millet Pecan Pudding (Vegan and Sugar-free) – Once you have cooked the millet, this Millet Pecan Pudding is very simple to make. It is for sure tasty and so healthy without sugar so you can have it for breakfast. And it has no milk or eggs which makes it a great vegan dessert. Also, what I like is that there is no sugar added. The raisins add some sweetness and then the healthy stevia does the rest making it sweet and yummy.

1 thought on “Carob Banana Pudding with Peanut Butter is Yummy”