I love plums! The best things about them are that they are a low-calorie superfood that won’t spike your blood sugar levels.  Also, plums are full of health benefits for your health. 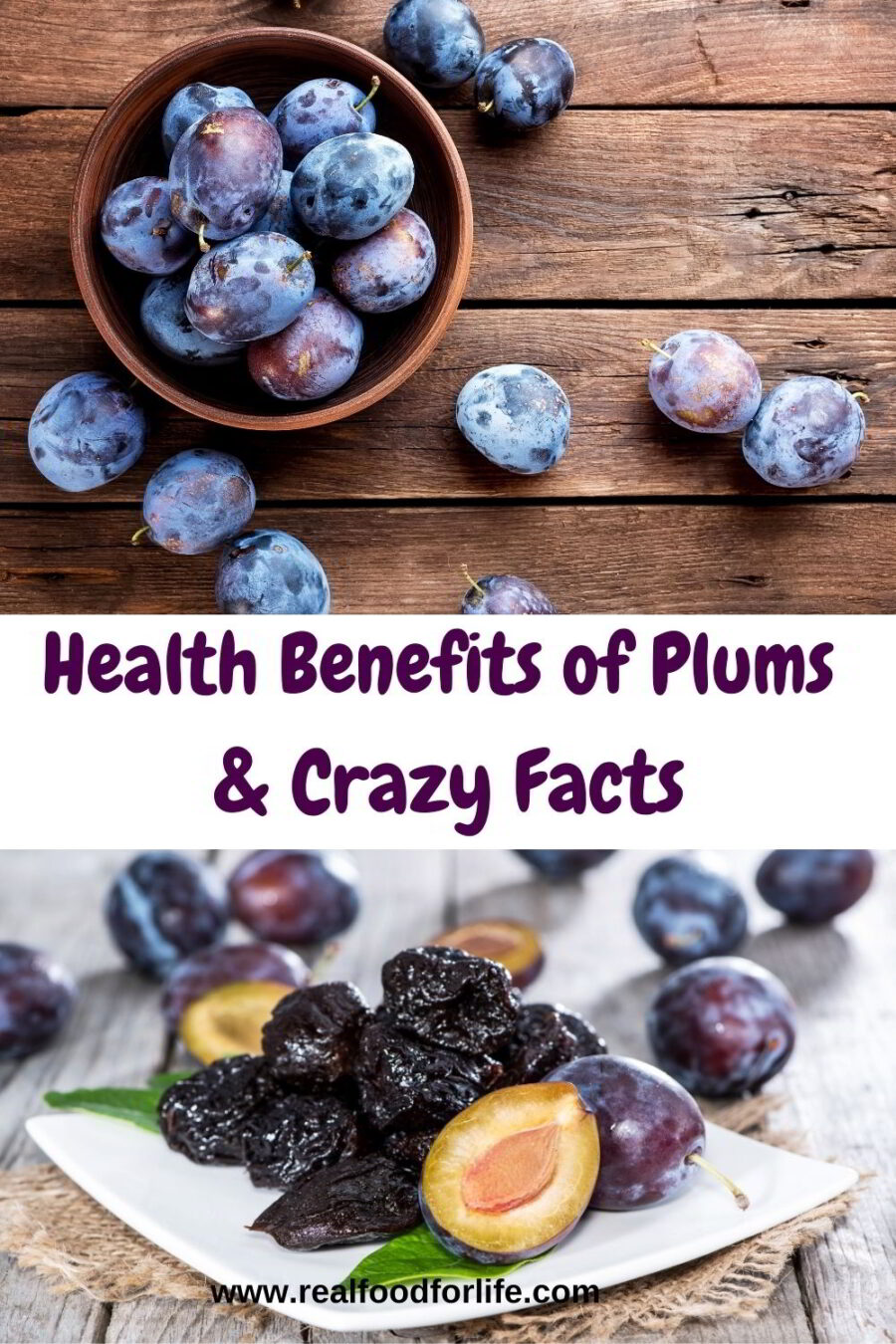 “The branches of the aspen plum
To and fro they sway
How can I not think of her?
But home is far away”
~ Confucius

Health Benefits of Plums For Your Health

A medium fresh plum contains 113 mg of potassium which helps manage high blood pressure and reduce the risk of a stroke.

In one study, subjects drank prune juice and ate prunes every morning on an empty stomach for eight weeks and were compared to a group that only drank a glass of water on an empty stomach every morning.  Those that consumed the prunes and prune juice had significantly lower blood pressure levels, total cholesterol, and “bad” LDL cholesterol than the group that drank water.

One of the health benefits of plums is that they are filled with dietary fiber and when they are dried and become a prune they are well known to help with constipation.

In a study with 51 adults suffering from constipation, those that consumed prunes had constipation relief.

3.  Protect Against Cancer and Cell Damage

Cleans up harmful free radicals with the anthocyanins, reddish-blue pigment in some plums. Anthocyanins are the most active antioxidants found in plums and prunes that may have positive health effects which include reducing the risk of heart disease and cancer according to studies.

A study where one group ate prunes, the other group ate dried apples and both took calcium and vitamin D supplements. The prune group had substantially higher bone mineral density in the spine and forearms.  (Florida State and Oklahoma State Universities Research.)

Plums have a low glycaemic index so eating plums can help you control your blood sugar and reduce the risk of type 2 diabetes according to the Dieticians of Canada.

They are very beneficial when dieting. A small plum contains only 30 calories and it still tastes sweet. A great health benefit of plums.

Another plums health benefits are that the extracts can kill breast cancer cells in their most aggressive forms; the surrounding healthy cells were not harmed by the treatment. (ScienceDaily.com)

The health benefits of plum health benefits are that they are full of antioxidants that have been shown to slow the development of Alzheimer’s. (The University of Harvard Health Research.)  They also contain anthocyanin and quercetin, beneficial for preventing brain cell breakdown.

100 overweight and obese people were divided into 2 groups; one group ate prunes every day, and the other group did not. Over a 12-week period. Those who ate prunes lost 2 kg (4.4 lbs.) in weight and 2.5 cm (3/4 inch) off their waists. – Research at the University of Liverpool.

It was found that those who drank prune juice and ate prunes had lower blood pressure than those who did not according to a study in 2010.

Plum Cautions: Plums and Oxalates:  Those with a history of kidney stones are advised to avoid eating plums. For more information about: Oxalic Acid

How to Select, Store and Prepare Plums

From May until September plums are at their best, but they are available year-round.

Look for fresh fruits featuring rich colour and that have a slight whitish covering; this means they have not been over handled. A ripe plum will yield to gentle pressure and have a sweet aroma. Do not buy plums that are soft, or with bruises. Also, avoid excessively hard plums as they are immature and will not develop a good taste.

Keep unripe plums in a fruit bowl at room temperature. They do ripen quickly, so keep an eye on them in the next day or two to make sure they do not over-ripen. You can freeze plums but for best taste remove their stone pits first.

Plums health benefits are best when they are fully ripened as they contain the most antioxidants. In fact, when the fruits fully ripen, almost to the point of spoilage, their antioxidant levels actually increase. – University of Innsbruck in Austria Research.

Learn how Prunes Make You Poop and Help with Weight Loss

Plum Crumble – This plum crumble is delicious and very healthy too because there is no white sugar in it. Also, it is extremely easy to make dessert.

Fruit Compote can be made with a mixture of dried fruit including prunes. 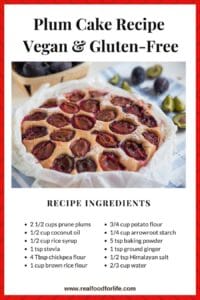 Sweet Plum Cake– I love this healthy gluten free, dairy free and egg free cake. For me, it is also important that there are no unhealthy sugars and any healthy sugars be in small quantities. Being vegan is important to me. This is why I create recipes like the one. Enjoy!

Here are a couple of prune recipes:

Sweet Prune Fruit Pudding with Custard is Delicious – This prune fruit pudding made with the fruit compote is so delicious. What makes this pudding so special is being topped with the vegan custard. Also, what I really like about it is that there is no sugar added.

Yummy Prune Jam is Sugar-Free with Apples and Cinnamon – This prune jam was so easy to make. Adding the cinnamon made it extra delicious. I did add a little stevia to make it taste more like a jam. This recipe makes two small jars. 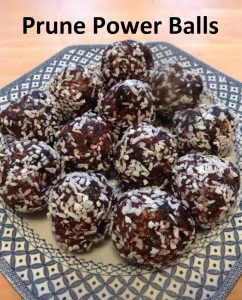 Powerballs are Yummy and Full of Energy – These prune power balls rolled in coconut have a bit of history.  Back in the hippy days, they were the famous ‘Bliss Balls’ that we all made very frequently. We made them with what we now call healthy superfoods.

Learn more about some of the healthiest vegan foods you will always want to have in your pantry or growing on your deck.

Chia Pudding with Wild Blueberries is Vegan, Very Healthy and So Yummy