Olive oil is packed with 12 health benefits from helping with weight loss to improving bine health to lowering bad cholesterol and much more. It is a special Superfood. Learn all 12 of the health benefits below.

Olive oil was referred to as “Liquid Gold” by the famous Greek poet Homer.  If you are what you eat, what would happen if you consumed “Liquid Gold” daily? It’s one of the top oils you need in your kitchen. 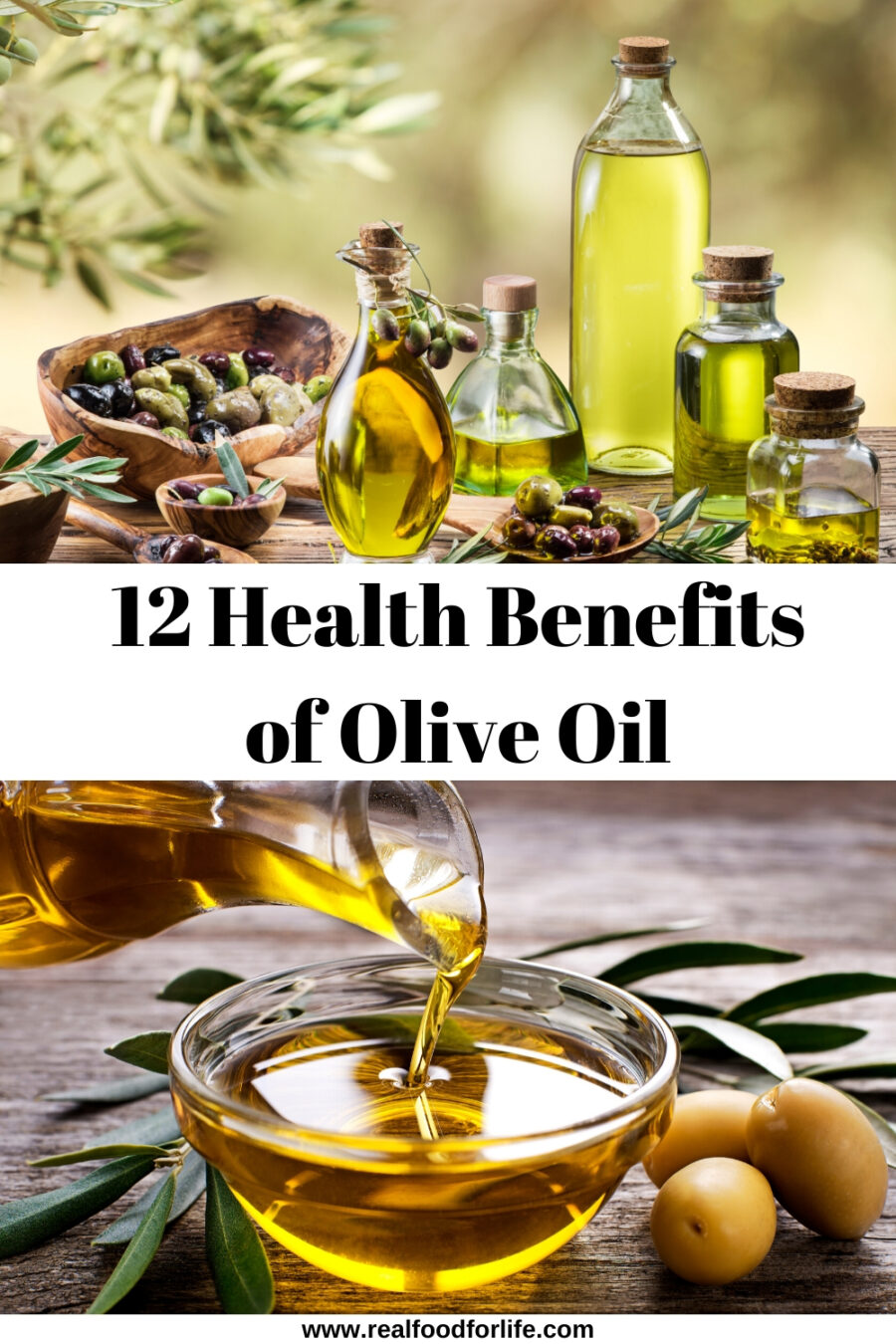 A Mediterranean diet rich in olive oil has been shown to reduce the risk of type 2 diabetes by almost 50 percent compared to a low-fat diet, according to this Spanish study.

It makes you feel full. In a study, participants ate low-fat yogurt over a period of three months. The yogurt was enriched with one of four edible fats: lard, butterfat, grapeseed oil, and olive oil.

“Olive oil had the biggest satiety effect. The olive oil group showed a higher concentration of the satiety hormone serotonin in their blood. Participants also reported that they found the olive oil yogurt very filling.” says Professor Peter Schieberle, Head of the TUM Chair of Food Chemistry and Director of the German Research Center for Food Chemistry.

“The taste and the aromas of olive oil lifts my spirits up. It has a profound and magical touch on my senses. Olive oil is a gift of Mother Nature”
~ George Pananos, Pillar Grove Estate

3. Good for a Healthy Heart

It slows down the aging of the heart. Those who consume it regularly are less likely to develop cardiovascular diseases.

A controlled study with 7,216 men and women at high cardiovascular risk, aged 55 to 80 years.

Twenty-eight outpatients were given olive oil supplements once a day for six weeks had a decline in total bad cholesterol to good cholesterol ratios.

People who consume olive oil have higher levels of osteocalcin protein which has a protective effect on bone, according to a two-year study.

Too much wax in the ears can cause earaches. This oil can help soften and remove ear wax.

In another study, it was found that those who put olive oil in their ear every night that earwax actually increased in their ears and the oil did not help it come out naturally.

Then in a 2010 study, they found that olive oil was more effective than no treatment.

It can be used as a deep conditioner to soften your hair and help repair damage. Also, consuming it helps hair from the inside-out because it is rich in vitamins A, B-1, B-2, C, D, E, K and iron.

It can protect against bowel cancer according to research in 28 countries. Also, those with high consumption of oleic acid ( a component of olive oil) had a 90 percent lower risk of developing ulcerative colitis compared to those with low consumption. 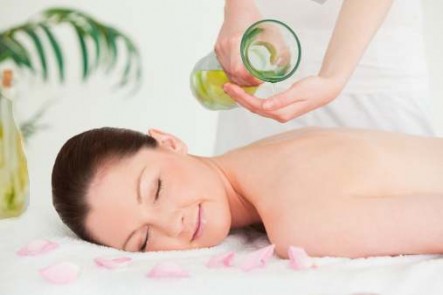 It moisturizes by penetrating deeply into the skin without clogging pores, unlike what many commercial skin moisturizers do. It does this so well that it is often used for skin conditions like eczema or psoriasis.

Melanoma, a dangerous type of skin cancer, can be slowed down by the consumption of olive oil which is rich in antioxidants, a study conducted by Dr. Niva Shapira from Tel Aviv found. Dr. Shapira says that consuming olive oil and other Mediterranean foods could be countering the oxidizing effect of the sun. Interesting fact:  only three in every 100,000 residents of countries in the Mediterranean develop any form of skin cancer.

Italians … seemed never to die. They eat olive oil all day long … and that’s what does it. ~ William Kennedy

A study found that 30 grams of EVVO, taken daily was eradicated Helicobacter pylori infection in 8 of 30 individuals.

“Helicobacter pylori (H. pylori) is a type of bacteria. These germs can enter your body and live in your digestive tract. After many years, they can cause sores, called ulcers, in the lining of your stomach or the upper part of your small intestine. For some people, an infection can lead to stomach cancer.” ~ WebMD

Also traces of potassium and calcium and phytosterols, squalene, polyphenols, tocopherols, and terpenic acids and other antioxidants

Have you heard of the olive oil fraud?

Find out Which Olive Oil to Buy.

More of a visual learner? Check out this easy-to-read infographic explaining the 12 benefits listed above: 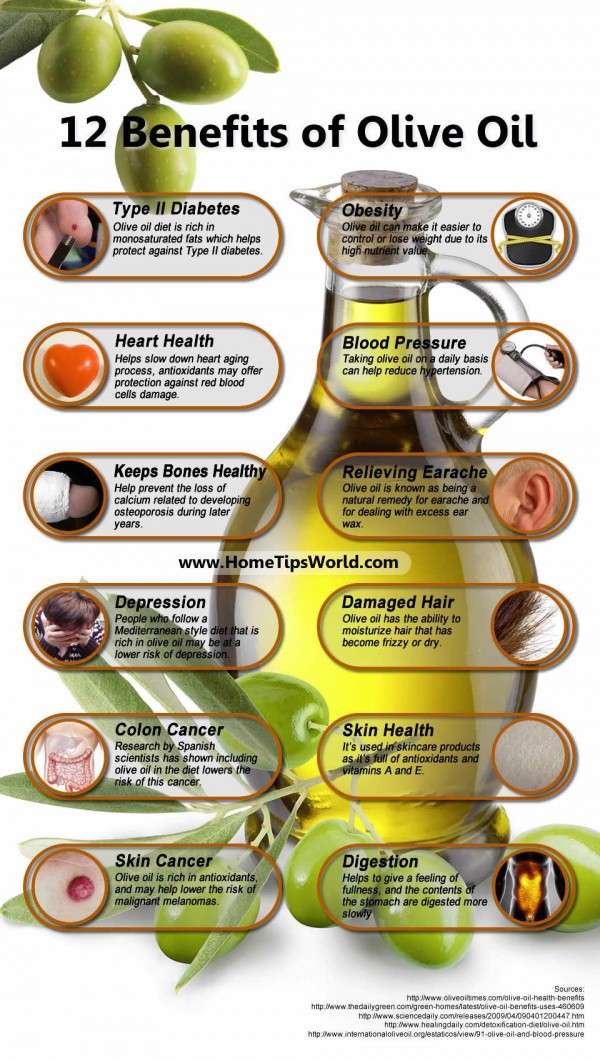 The ancient Greeks believed olive trees were a gift sent from the wise, courageous and inspirational goddess Athena. Olive trees were considered so sacred that the Greek Laws of Solon in the 6th to 7th century BC would not allow them to be cut down.

In the Mediterranean, the olive tree has been thought of as sacred for thousands of years. With a lifespan of 300 to 400 hundred years, we are fascinated by it.

How is Olive Oil Made?

Olives, the fruits of the olive tree, are pressed and the olive oil is released. As simple as that is, it isn’t always what actually happens. Some companies extract the oil by using chemicals like solvents, or they heat treat the olives to extract the oil. To make more money they may even dilute it with cheaper oils.

Which Olive Oil to Buy? Beware of Frauds!

There are so many brands on store shelves, it can be hard to know which ones are authentic. Just because the label says  ”extra-virgin olive oil” does not mean that it actually is. 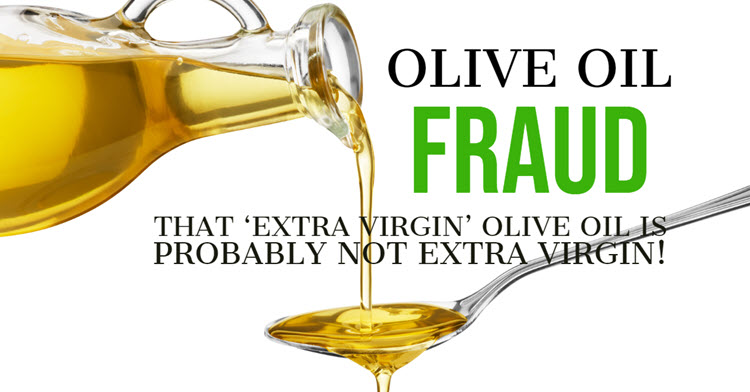 Learn how to deal with olive oil fraud here.

If my cuisine were to be defined by just one taste, it would be that of subtle, aromatic, extra-virgin olive oil. – Alain Ducasse

How to Use Olive Oil and Get the Health Benefits

Do not use it for cooking at high temperatures. It has a low smoke point and heat makes it susceptible to oxidative damage. It is best to add olive oil to foods immediately after cooking.

Or if you do want to cook with it use a non-virgin oil.

Remember to store oil in a tightly sealed jar in the refrigerator.

The combination of olive oil, garlic and lemon juice lifts the spirits in winter.” ~ Yotam Ottolenghi

Let’s get the health benefits of olive oil in by making some tasty recipes with it. 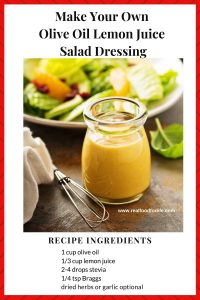 Make Your Own Olive Oil Lemon Juice Salad Dressing– This is a simple salad dressing base recipe that you can make up different each time with a variety of herbs or types of salty flavours. This olive oil lemon juice salad dressing is always enjoyed by everyone who has it on one of my salads. This is why I created the exact recipe years ago.

Powerful Anti-Inflammatory Salad Dressing – This salad dressing is full of 3 of the 12 Top Anti-Inflammatory Foods.  Inflammation has been linked to major diseases such as Alzheimer’s, arthritis, cancer, diabetes, heart disease, and signs of aging.

Balsamic Salad Dressing – For a change, I occasionally make this balsamic salad dressing. I still put lemon juice in it as I do not want too much of the acid vinegar which I just use to add flavour. I always get organic balsamic vinegar.

Light Lemon Oil Salad Dressing: This is a very good salad dressing for those wanting to keep slim. Includes a base recipe with optional herbal ingredients.

Vegan Pesto:  I love this vegan pesto — minus the cheese.

Have you heard of the olive oil fraud?  Find out Which Olive Oil to Buy.