Yes, prunes will help you poop and they are a nutritious superfood. They are full of many amazing health benefits from helping with constipation to lowering blood pressure to even helping with weight loss. So do enjoy a healthy prune or two as these dried plums are a tasty sweet treat.

Prunes are high in calories and sugars but contain high amounts of fiber, sorbitol and fructose, so interestingly they don’t spike blood sugar levels or insulin levels after eating them. They have a low glycemic index so they increase blood sugar levels at a slow rate.

Note: Prunes are high in simple sugars, including fructose, even though research has shown they do not spike blood sugar levels because of high fiber and sorbitol. Still, because of the fructose, it is good to limit the amount you consume. A medium prune contains 1.2 grams of fructose; it is best to limit your intake to a maximum of 15 to 25 grams of fructose per day from all sources depending on being insulin resistant, diabetic or hypertension.

Now we know why traditional medicine used prunes as a remedy for hepatitis, a liver infection.

It was found that prune juice and prunes improved liver function and were helpful at preventing liver disease in a study in 2010.

Researchers at the University of Liverpool had 100 overweight and obese people divided into 2 groups; one group ate prunes every day and the other group did not over a 12-week period. Those who ate prunes lost 2 kg (4.4 lbs.) in weight and 2.5 cm (3/4 inch) off their waists.

It was found that those who drank prune juice and ate prunes had lower blood pressure than those who did not according to a study in 2010.

What prunes are most well-known for is their use as a laxative.

A 2008 study with 51 adults suffering from constipation found that those that consumed prunes had constipation relief.  It helped to soften stools and increase bowel movements. This is because prunes are high in fiber and contain high levels of sorbitol, which is a laxative.

In a 2014 review in the journal Alimentary Pharmacology and Therapeutics, the research found that prunes were better than psyllium husks at treating constipation. Those with constipation can try drinking prune juice.

A study with 160 women who were 1-10 years postmenopausal and not on hormone replacement therapy were put into two treatment groups.  One group was given prunes and the other dried apples. Also, both groups were given 500 mg Ca and 400 IU vitamin D daily. Before beginning the study their whole body mineral density was assessed and again at the end of the 12-month study. Those in the prune group had more improvement in bone mineral density than those on dried apples.

Prunes being made from plums, it is when they were discovered that prunes had a chance of being created. 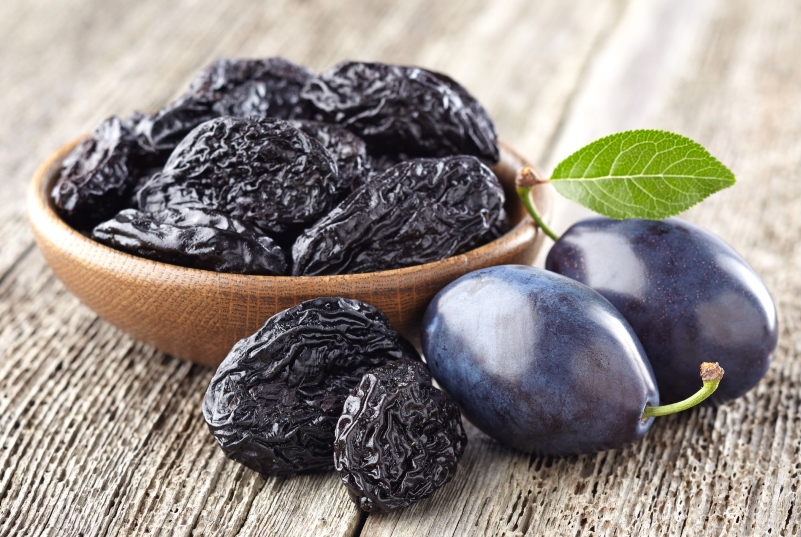 You can buy them either pitted or with their pits. It is best to get prunes that are not processed with food preservatives such as sulfites or potassium sorbate. Also, purchase prunes that are in transparent containers so that you can assess them for quality. The best are shiny, plump, a little soft and free of mold.

Keep them in a cool, dark, dry place in an airtight container and they will last for several months. Keeping them in the fridge will make them last as long as six months but they will be a little hard when you so take them out of the fridge for an hour before eating them.

If your prunes get very dry, soak them in water for an hour to plump them up. It always works.

Before you cook them, soak the prunes in water first as this will reduce the cooking time.

Delicious Prune Recipes For You

Sweet Prune Fruit Pudding with Custard is Delicious – This prune fruit pudding made with the fruit compote is so delicious. What makes this pudding so special is being topped with the vegan custard. Also, what I really like about it is that there is no sugar added.

Yummy Prune Jam is Sugar-Free with Apples and Cinnamon  – This prune jam recipe was so easy to make and healthy without all that sugar usually found in jams. It took me just over an hour which included taking lots of photos of the jam too. Adding the cinnamon made it extra delicious. I did add a little stevia to make it sweeter. This recipe makes two small jars as seen in the photos in the recipe.