Another thing that I never liked about potato salads is that you don’t get lots of other vegetables in it to get the right balance of carbs.
This potato salad is not only vegan, but also has some other delicious veggies to balance out the starch of a potato salad.

Potatoes – one of the most commonly eaten vegetables on the planet has its fans and its enemies. Learn about its many health benefits (the good) its health concerns (the bad) and its controversial effect on weight management (the ugly).

Celery is a negative calorie food, meaning it takes the body more calories to digest it than the food itself contains making it a very good food for weight loss.  One stalk of celery has only a few calories because it is full of healthy cellulose. It is 95% water, very alkaline, and filled with fiber.  Its weight loss benefits are well known but you would be surprised at its other amazing properties.  Celery adds a nice crunch to this potato salad.

Carrots – forget about Vitamin A pills. With this orange crunchy superfood, you get Vitamin A and a host of other powerful health benefits including beautiful skin, cancer prevention, and anti-aging. They add some healthy veggies to this potato salad.

Here is my recipe for a Vegan Potato Salad which is creamy, filled with lots of vegetables, yummy and healthy without the chemical additives. 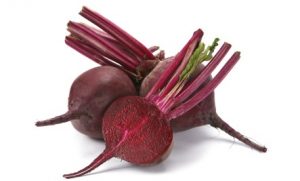 A single serving of beets can boost your energy and lower your blood pressure. Eating beets long-term can help fight cancer, reduce arthritic pain, lose weight and assist in a number of other health areas.  The beets make this potato salad really unique and add some beautiful color to your meal.

A sprig of delicious dill adds a unique flavor to your food making it extra tasty and pairs wonderfully with potatoes in this potato salad. Dill’s name comes from the Norwegian word ‘dilla,’ meaning to soothe. It has been valued for its many health benefits as early as 1500 B.C. In ancient Egyptian papyrus manuscripts, it was documented as a remedy to soothe flatulence, relieve pain, and act as a laxative and a diuretic.

Lemons are an important ingredient in this potato salad recipe. The juice from lemons has great digestive qualities so many people find that symptoms of indigestion such as heartburn, bloating and belching are often relieved. Also, lemons help to cleanse the body of toxins. Learn more about the 16 Health Benefits of Lemon – the Alkaline Powerfood.  Fresh lemons are very high in Vitamin C and dietary fiber. They also have Vitamin B6, Calcium, Potassium, Copper, Thiamin, Riboflavin, Pantothenic Acid, Iron, and Magnesium and is they are low in calories. 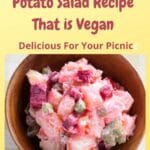 This is a very healthy recipe for a potato salad that is vegan. I have never liked potato salad because of the commercial mayonnaise used even in homemade salads. First, the commercial mayonnaise creates nausea for me, and secondly, I know from reading the label that those are not the things I want in my body. Another thing that I never liked about potato salads is that you don't get lots of other vegetables in it to get the right balance of carbs.  This potato salad is not only vegan, but also has some other delicious veggies to balance out the starch of a potato salad.Take this salad on a picnic.  Summer is the Time to Enjoy a Healthy Picnic with Tasty Food
Course Salad
Cuisine gluten-free, vegan, vegetarian
Keyword potato salad, potatoes, salad, Vegan, vegetarian
Author Diana Herrington

Find out more about the healthy ingredients I use for my Potato Salad: potatoes, celery,  green pepper, beet, carrot,  dill weed, lemon juice.
I use Nayonaise (from the health food store) OR  Yogurt Dip to dress the salad with,

Note: Do not put in a blender; it will become very liquid.  (Guess you know I did that).

Also Note:  This Creamy Vegan Yogurt Salad Dressing recipe is specific for our Weight Loss BootCamp.   Check it out! Have you heard of the olive oil fraud? Find out Which Olive Oil to Buy. 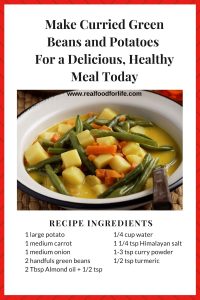 Curried Green Beans and Potatoes – Curried green beans with carrots and potatoes are extra special and delicious making a delicious meal. This recipe is filled with only healthy ingredients and it is easy to make.

Diana’s Potato Latkes– This Potato Latkes recipe makes a delicious and fun vegan dinner meal.  Usually, this recipe would include eggs but I like to cook without eggs for a number of reasons.

Tangy Baby Potatoes – Baby potatoes are in season; I remember mom making them in their jackets as a vegetable with the main meal.  For hungry kids, they do well as fillings between slices of bread.