Have you heard about the vegetarian dog who lived to the ripe age of 27? That’s 189 in dog years!

“Bramble”, a blue merle collie, lived in the UK and held the Guinness World Record for being the oldest living dog at the time.

What’s most amazing about this story is that Bramble lived on an exclusively vegetarian diet of rice, lentils and organic vegetables.

She ate once a day and exercised a lot.

The owner of the dog, Anne Heritage, was a vegan herself, and she simply fed Bramble a big bowl of vegan fare every evening.  She explains that Bramble “is an inspiration and just goes to show that if you eat the right things and keep on exercising you can extend your life”.

Bramble is considered to be 189 years old because of the common usage of counting 7 dog years for every human.  This number is controversial because it is inaccurate.  Different dog breeds have different lifespans, and dogs, like humans,  age more rapidly at different stages of their lives. Any way you count it though, Bramble lived a long life. 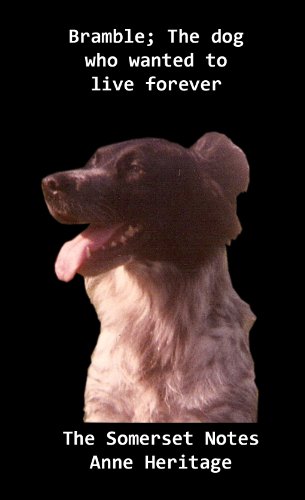 Read the book all about his story: Bramble; The dog who wanted to live forever.

There have been long living non-vegetarian dogs also.  Dogs like Bluey, an Australian Cattle Dog who lived to be 29 years and 5 months. We also don’t know what Bramble ate at the beginning of its life since she was a rescue dog.

Some experts say that dogs are scavenging carnivores which means that they are naturally meat-eaters but can sustain themselves on other protein sources.

Other experts say that dogs are omnivores, which means that they can live on a diet composed of meat, fruits and vegetables. They are capable of digesting and combining various forms of proteins in just the same way a human’s system can.  Everyone agrees that cats are different. Cats really are completely carnivorous.

Experts say if you are thinking of switching your dog’s diet to be vegetarian, it is easier if you start young so they don’t have a difficult adjustment period.   They should also be in good health.  The people who do this are usually vegetarians or vegans themselves.  You might be a vegetarian for health reasons, for humane reasons, or for environmental reasons.  A medium-sized meat-eating dog, for example, has more of an environmental impact than a gas guzzling SUV due to the amount of energy, land and water that meat production requires.

I’m not an expert on dogs but I do know we have tested a small sampling of them with our Vital Health Testing.  This testing, which normally tests humans, has been used by concerned pet owners as well. The dogs that were vegetarian did NOT test as needing more protein any more than the meat-eating dogs. Perhaps they were just well fed?

This story or information does not prove your dog SHOULD be vegetarian. It does show that dogs CAN survive on such a diet. 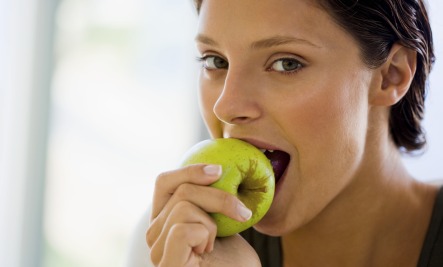 Can Humans Survive AND Thrive On a Vegetarian Diet?

A major portion of the world population lives quite nicely on a doggie diet much like Bramble, especially when you consider she ate a lot of rice, beans and vegetables. That’s exactly what has sustained most Asian cultures for centuries.

At Real Food For Life, we don’t suggest that everyone has to be vegetarian or vegan, but we do believe that many people would be healthier eating less meat.

We TEACH people how to plan and prepare a meal such as Bramble’s in our online 2-5-30 Healthy Diet Courses. Sometimes the focus is on alkaline balance,  sometimes weight loss, and sometimes gluten-free cooking.

Carnivores traditionally are the shortest-lived animals in nature. Vegetarians like whales, tortoises, and clams are typically the longest-lived.   If you look at the teeth structure, jaw structure and digestion system of a dog, it is pretty clear that dogs are better physically adapted to eating meat than man.

“I personally chose to go vegan because I educated myself on factory farming and cruelty to animals, and I suddenly realized that what was on my plate were living things, with feelings. And I just couldn’t disconnect myself from it any longer.”  ~ Ellen DeGeneres

Therefore, if a man is more suited to a vegetarian diet, there is a very good possibility a man can live a long and healthy life eating LOTS of vegetables and fruits. We encourage you to do so!

Are YOU a vegetarian.  Is your dog?

Find out What Happens When a Rancher’s Wife Turns Vegan? – This story about a rancher’s wife going vegan is very sweet and true. Tommy Sonnen told his wife Renee not to name the cows but she did and that was the beginning of a new life for both of them. Watch the video for the story.

Read Mesa Man of 110, Credits 5 Foods for His Long Life

Year of the Dog

All the recipes here on Real Food for Life are vegan. Check them out here: Vegan Recipes.

Here is one of my favourite recipes recreated vegan: Vegan Chilli Recipe That is So Yummy

“Our farm babies are the original salt of the earth! They make our life so much better than it ever was before.” ~ Renee King-Sonnen, Rancher’s Wife who went vegan.

43 Meatless Monday Recipes That Are Vegan And Delicious– This is a great page full of tasty Meatless Monday recipes. This is very helpful for those who have decided to do Meatless Monday for at least one month. Also, all the recipes are healthy, gluten-free vegan recipes for you to enjoy. Research has shown that eating less meat is better for good health.

To learn more or if you are not sure, read this: Is the Meatless Monday Movement For You?