I update this list each year as it does go through some changes.

Eating organic is something we can do both for ourselves and the planet. It makes you feel safe, healthy, and ‘green.’  It is a subject near and dear to my heart.

For the 12 foods listed below, eating organic is much more than a ‘feeling.’ They have been proven to be drenched in deadly chemicals, so you don’t ever want to put them in your body unless they have that ‘certified organic’ sticker!

There  are other foods that often don’t get  as much spraying ect. and you can get away with non organic if you have to.  Make sure you know the difference!

1.  Better health through reduced allergies and diseases
Organic food is not raised using chemical fertilizers and pesticides.  It therefore, does not contain any traces of these strong chemicals that can affect the human body. This is particularly important for children, fetuses, pregnant women or people with sensitive immune or digestive systems.

2. Better health through more nutrition
Care and maintenance of soil, and preventive farming methods like crop rotation create fruits and vegetables that contain up to 50% more vitamins, minerals, and other nutrients than commercially farmed foods.

3. Better taste and Quality
Many people believe that because organic is produced in smaller closer farms, it gets the perfect balance of nutrition and that ATTENTION that creates healthier plants.

4. Save the environment
As harmful chemicals are not used in organic farming, there is minimal soil, air and water pollution; thus ensuring a safer world for future generations to live in.

6.  Non Genetically Modified
By choosing organic you automatically eliminate genetically modified crops. We are just now beginning to be understood the problems of genetic modification for our bodies and the world.

Why Not to Eat Organic

1. Its expensive; sometimes twice or three times the price. This just doesn’t seem fair.
2.  The selection of organic produce is not extensive enough.
3.  Some stores don’t sell enough organic so the produce sits too long before sale.

12 Foods You Must Eat Organic. 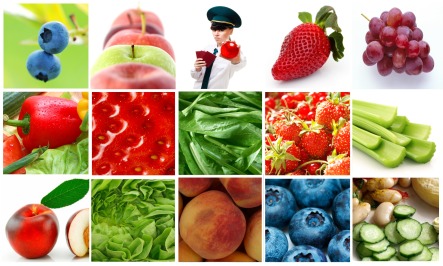 This list of foods is called the “Dirty Dozen” and is updated each year at EWG’s Shopper’s Guide. The below list was last updated for 2016. All foods listed below from worst to best (lower numbers = more pesticides)

1. Apples: This healthy superfood has to look perfect or consumers are suspicious.  New to the top toxic spot, apples are susceptible to more than 30 insects and at least 10 diseases, and so are sprayed many times during the growing season. Fungicides and other chemicals are also added after picking to prevent tiny blemishes that can accumulate during storage of up to 9 months. Read the possible health benefits of apples at   Apple Benefits.

2. Peaches: Farmers may spray peaches every week or two from bloom to harvest—and peach fuzz can trap pesticides says peach breeder John R. Clark, PhD, a horticulturalist at the University of Arkansas, who peels every one of the thousands of peaches he eats each year. The USDA Pesticide Data Program found 62 pesticide residues.

3.  Nectarines: They are closely related to peaches, so they have the same weakness and “need” the same chemical support.

4. Strawberries: They are delicate and prone to disease, including fungal attacks that can turn them to mush during transit and storage. Millions of pounds of methyl bromide are used every year by California strawberry growers. It damages the ozone layer, so it is banned in many parts of the world. “This chemical has an uncanny ability to damage DNA, which creates a host of problems, ranging from reproductive effects to cancer and neurological damage,” explains Gina Solomon, MD, MPH, chief scientist at Natural Resources Defense Council. “Since the chemical is also highly volatile, it is easy for it to drift and affect workers and nearby communities.

6. Celery: “Nobody likes to find a caterpillar-damaged stalk in their celery bunch,” says Stuart Reitz, PhD, a research entomologist with the USDA. There are 64 pesticide residues found on celery.

7. Spinach: Those green leaves are loved by grasshoppers and other insects, and the plants themselves suck up chemicals from the soil. For example, spinach has been shown to contain DDT from the soil, even though DDT was banned over 10 years ago. (You don’t just want to pass on spinach, though. It’s too healthy, as you can read here: Spinach Health Benefits)

8. Sweet Bell Peppers: The creases in their crowns hold pesticides, so they soak in. They also have less insect-deterring compounds in them.

9. Cucumbers: Without spraying, they can be very delicate. The USDA Pesticide Data Program found 35 pesticide residues.

12. Potatoes: They are sprayed 5 or more times throughout the growing season to protect against various pests. After harvesting, another round of spraying occurs in the packing shed to ward off mold.

14. Blueberries – domestic. The berries are targets for insects such as blueberry maggots and bagworms. The USDA Pesticide Data Program found 52 pesticide residues.

17. Cherries: If just one of the western cherry maggots is found in a shipment, the entire load of fruit must be dumped, so growers spray out of fear of losing their crops.

Check out more about the USDA Pesticide Data Program here.

If you are familiar with Star Wars, this video, Grocery Store Wars, is a great spoof with a strong message supporting organic farming. A movie from not so long ago, in a supermarket not so far away… Join the adventures of Cuke Skywalker, Obi-Wan Cannoli, Chewbroccoli and the rest of the Organic Rebels fighting against Darth Tader and the Dark Side of the Farm. 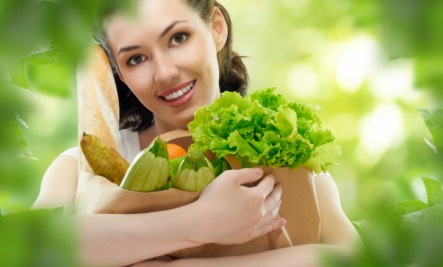 15 Foods That Have the Least Amount of Chemicals

One way to remember these lists is that the safe foods have thick rinds that you usually don’t eat.  There are a few exceptions.
for example, asparagus and mushrooms spring up so fast the insects don’t have time to attack.  Sweet potato has its own unique bug protection.

The dangerous list can be generalized by foods that have lots of surface area such as leaves or skin we eat.

Some people are still a little cautious of the organic produce food found in large regular stores, which you can’t always verify.

I prefer to buy my food at the farmers’ market, where I know exactly where it is coming from. You get to know the farmers and their integrity. Also, I do tend to buy according to the Dirty Dozen and the 15 least contaminated produce types. (You can read more about farmers’ markets and find one close to you here: The Joy of Farmer’s Markets)

The ‘Dirty Dozen’ is a list I take seriously, and I will not buy the produce on them unless they are organic. I have a history of poor health. If there is an occasion where I buy non-organic, I soak them in my favorite fruit and vegetable rinse that takes away some of the chemicals.  Nothing can remove all the chemicals, so if organic strawberries are not in my budget, then I really don’t eat strawberries.

If you do not care about putting chemicals into your body, then do it for the earth and for the poor workers that are getting sick from working with these toxic chemicals. For instance, methyl iodide (used in strawberries) is a serious health risk to the people who work in the strawberry fields and to the families who live nearby.  They are getting sick from it.  Fortunately, in the summer, I can grow my own strawberries and know a good farmer that grows organic ones too.