Millet is a gluten-free grain that provides a host of nutrients and has a sweet nutty flavour. It is considered to be one of the most digestible and non-allergenic grains available.  It is one of the few grains that is alkalizing to the body.

It has always been a favorite grain of mine since I discovered it in my hippy days in the 70’s!

Below, read about the 10 health benefits, some interesting trivia and history, 10 tips on how to use this gluten-free grain, and delicious recipes made from it.

1. Millet is alkaline and it digests easily

2. This grain is low on the glycemic index.

It will keep your blood sugar level stable. A study with diabetics showed that dehulled millet is beneficial for type-II diabetics.

This gluten-free grain acts as a prebiotic feeding microflora in your inner ecosystem. In a study, they found that there was prebiotic activity when eating millet, there was an increase in the friendly bacteria which helps promote digestion.
Best not eat too much millet at one time as there can be adverse side effects.

The consumption of this grain decreases triglycerides and C-reactive protein.  Scientists in Seoul, South Korea concluded that millet may be useful in preventing cardiovascular disease. Nutrition Research. April 2010; 30(4):290-6.

It has more essential amino acids than most other cereals making it a substantial addition to a vegetarian diet.

8. It is a gluten-free grain and non-allergenic

This makes it a great grain for gluten-sensitive individuals.

Calcium is necessary for bone health, blood vessel and muscular contractions.
“It has the highest calcium content among all cereals (344 mg/100 g).” ~ Bharathiar University, Coimbatore, India

The high levels of tryptophan in millet produces serotonin which is calming to your moods and helpful for sleep.

Please Note:  Food and Safety tips: Millet is not an acid-forming food so it is easy to digest and is considered to be one of the least allergenic and most digestible grains available.

Millet contains small amounts of goitrogenic substances that limit the uptake of iodine to the thyroid. The “thyroid function inhibitors” can cause goiter when consumed in large quantities; this may explain the correlation between millet consumption and goiter incidence in developing countries where millet constitutes a significant part of the diet. Also, in some of these countries, there may be a lack of sufficient dietary iodine.

There are Many Varieties

The main millets are: 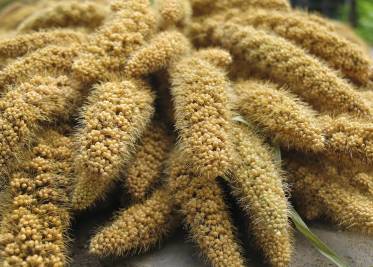 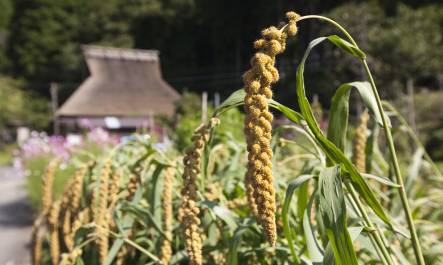 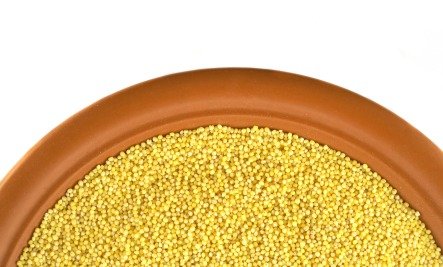 How to Buy and Store:

10 Tips for eating or cooking: 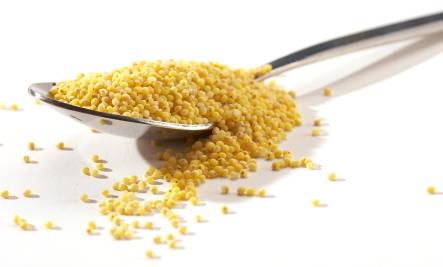 What would life be like without gluten-free millet? Fortunately, it is readily available for me as it grows right here in my home province of Alberta.  For those of you who thought that it was just bird food; it is one of the power foods for us.

Learn How to Cook Perfect Millet with my very simple energy-conserving way.

Easy to Make Yummy Millet Pecan Pudding (Vegan and Sugar-free) – Once you have cooked it, this pudding is very simple to make.  It is for sure tasty and so healthy without sugar so you can have it for breakfast. And it has no milk which makes it a great vegan dessert.

Millet Porridge – Vegan & Gluten-Free – This porridge is a great way to start the day. It is tasty, alkaline-forming, vegan and gluten-free!

Millet Pudding, Sugarless, Gluten-Free – This pudding is simple, very nourishing and is gluten-free and vegan too.

Millet and Buckwheat with Sunflower Seeds – This recipe is a favorite of mine; it is very yummy and mostly alkaline. The buckwheat with its full flavour enhances the very light flavour of the millet.

Tasty Millet Coconut Pudding with Brazil Nuts – This creamy coconut pudding is extra delicious with the addition of Brazil nuts. It is gluten-free, vegan and easy to make with all healthy ingredients.