Beautiful glossy deep purple eggplant has a unique taste and texture.  It is full of health benefits and is tasty too. The first time I saw this amazing superfood was at a European market shop decades ago. It was so beautiful that I bought one and put it on the counter for a couple of days to enjoy its beauty before finding a recipe.

“Gleaming skin; a plump elongated shape: the eggplant is a vegetable you’d want to caress with your eyes and fingers, even if you didn’t know its luscious flavor.” – Roger Verge

The beautiful eggplant is loved for its vibrant purple color and unique pleasant bitter taste.  It is also full of nutrition and health benefits. 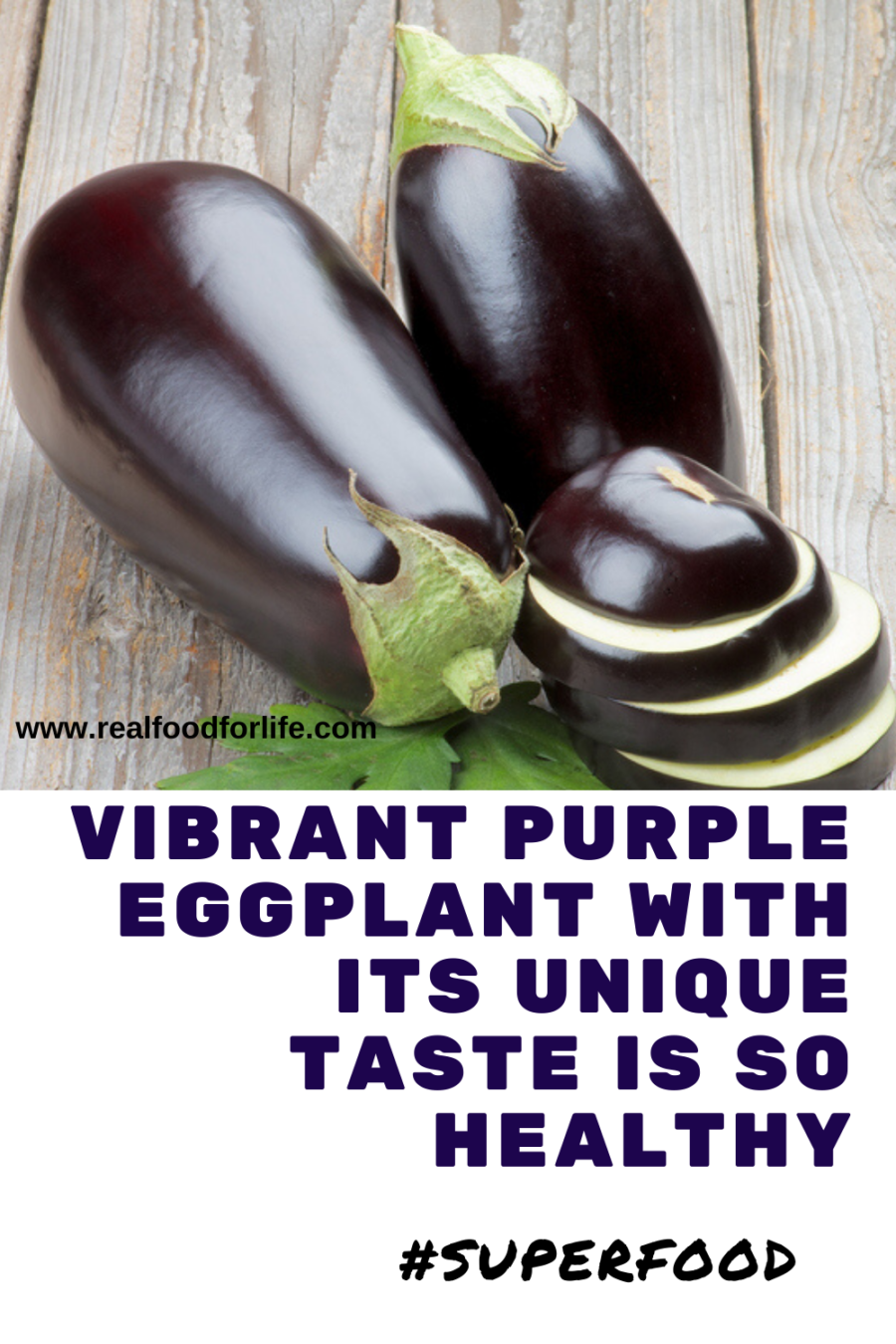 Eggplants contain a rare, unique antioxidant called nasunin which is exceptionally beneficial. It is a powerful antioxidant neutralizing free radicals which can cause damage to our living cells and tissues.  Nasunin gives the eggplant it’s dark purple coloring which protects it from environmental damage particularly from the sun.  Nasunin is also found in deep colored vegetables and fruits such as the red turnip and red cabbage. The purple skin of the eggplant has the highest amount of nasunin making it very beneficial.

Iron chelator helping iron to be easily absorbed according to studies.

Nasunin protects the fat layer of the cell membrane which keeps it together and stops a change or death of the cell.

Nasunin fights inflammation and oxidative stress according to studies. It also helps remove poisonous metals (mercury, arsenic, and lead) out of the body.

Increases Nutrient Use and Removal of Waste

The antioxidant, nasunin helps the cells in our body use the nutrients from the food we eat and remove waste. Removal of wastes is important because when there is a buildup of toxins in our body it can lead to the development of many diseases such as heart disease, cancer, and arthritis.

Note: Iron is a vital nutrient (for oxygen transport and immune function) but too much iron is not good. Too much iron increases free radical production which can cause an increase in heart disease and cancer. Women menstruating lose iron every month so they are not likely to have too much iron.  Postmenopausal women and men can easily accumulate too much by chelating iron.

The Laboratory of Food Biotechnology, University of Massachusetts found it to help control glucose absorption and reduce associated hypertension.

It is full of antioxidants, special phytonutrients such as nasunin, and many vitamins and minerals. Also, all of this comes with only 35 calories per cup.  Learn more about Eggplant nutrient details.

To receive all these wonderful nutrients, it has been found that cooked eggplant is better than raw eggplant.

How to Select the Best Eggplant

They are at best when they are in season from August through October but you can get them all year long. Make sure that it is heavy and firm a skin of bright color that is smooth and shiny. They are best with no bruises and discoloration with stems on the ends bright green.  Press the skin with your thumb and it will spring back if it is ripe with no depression remaining. For sure it should not be waxed.

How to Store Eggplant

They are very delicate as they are sensitive to both cold and heat. It is best to store in the refrigerator uncut because once the skin has been pierced the inner flesh will spoil.

An eggplant wrapped in a plastic film will not let it breathe so remove it. Put unwashed eggplant into a plastic bag and store it in the refrigerator’s crisper.

First, wash it and cut off the ends using a stainless steel knife as a carbon knife with cause it to turn black destroying phytonutrients.

Leave the skin on as that is where most of the health benefits are except the large white ones that usually have inedible tough skins.

The bitter taste which is natural can be reduced by sprinkling it with salt and letting it sit for about 30 – 40 minutes.  This will pull out some water making it less absorbent oil used in cooking.  Rinse it and now it can be cooked. Now they can be fried, sautéed, baked, or steamed.

“When I was alone, I lived on eggplant, the stove top cook’s strongest ally. I fried it and stewed it, and ate it crisp and sludgy, hot and cold. It was cheap and filling and was delicious in all manner of strange combinations. If any was left over, I ate it cold the next day on bread.” ~ Laurie Colwin

Delicious Stuffed Eggplant for Your Dinner – This stuffed eggplant makes a delicious savory main course for dinner as it is so filling and it is super easy to make.

Vegan Curry Recipe That is Delicious and Easy to Make – This vegan curry recipe is delicious and so easy to make! It is full of nutritious nutritious superfood vegetables and spices that your body loves. Also, if you are like me and don’t like hot spicy food, you can make this curry without it being hot.

Sweet Bell Peppers Stuffed with Wild Rice – This sweet bell peppers recipe with wild rice is a favourite of mine. It’s yummy, beautiful and nutritious!

Creamy Chickpea and Rice Pie– This chickpea pie is a very tasty meal which does take a little extra time to prepare but it is worth it.