Potatoes are more than comfort food; they are in fact full of nutrients and have many health benefits.  We mostly think of potatoes as a fattening food but according to studies, we have learned that you can lose weight eating them. It may surprise you to learn that they are a superfood.

“Potatoes have been cultivated for thousands of years, and we thought traditional crops were pretty well understood, but this surprising finding shows that even the most familiar of foods might conceal a hoard of health-promoting chemicals”.  Food scientist Dr Fred Mellon

Time to learn about all those potato health benefits from actually helping with weight loss, to lowering blood pressure and much more.

In a study, 90 overweight men and women added 5 to 7 servings of potatoes to their diet per week. The results were that the men and women lost a small amount of weight.

The fiber in a diet is an important factor in weight loss because it makes one feel full, thus making one feel full longer and consuming fewer calories.

Eating potatoes with their skins, prepared without oil once or twice every day can reduce high blood pressure.

The Washington State University did a study in 2011 that found potatoes to reduce inflammation which can be the cause of many major diseases.

Eating purple potatoes may reduce the risk of colon cancer according to a study published in the Journal of Nutritional Biochemistry.

5. Helpful for Digestion and Keeping Regular

These health benefits don’t work if they are greasy french fries or potato chips.

A baked potato would work but not if it has added butter, sour cream, melted cheese or bacon bits. Eating them in those ways can contribute to a number of health issues.

Potatoes have a reputation for being high in carbohydrates and low in nutrients.  Most of what creates unhealthy potatoes are the frying of them or the addition of lots of butter, sour cream, bacon or cheese being heavily used.

A 2-ounce potato skin has:

You can see that it is important to consume the skin too as it will give you extra nutrients. The flesh of the potato also offers you nutrition so eat both.

For more information: Calories and Macronutrients

How to Pick the Best Potatoes

It is best to buy them in a bulk display and not in a plastic bag. If the bag is not perforated there can be a build-up of moisture causing them to begin to decay or sprout, which is not a good thing.

Make sure they are firm, relatively smooth, with no decay and not pre-washed. Washing them removes their coating which is protective, putting them at risk for bacteria. You’ll have to wash them before cooking anyway.

It is very important that the potatoes are not sprouting or have turned green as this is a sign that they may contain a toxic amount of glycoalkaloids. Not just an unpleasant taste, it has been found to cause symptoms such as nausea, abdominal pain, vomiting, diarrhea, dizziness and headaches. Also, more than 20 mg of glycoalkaloid causes fatal illness. Learn more about Potato Poisoning.

The symptoms don’t usually occur until 8-12 hours after eating green or sprouted potatoes. The first time I had an experience with sprouted, peeled green potatoes was 2 hours later, I was feeling very nauseous and had intense stomach pains for a whole day.

Some small studies suggest that it is not good to eat sprouted potatoes during pregnancy. It may increase the risk of birth defects.

“Maternal consumption of sprouted potatoes during periconceptional period may increase the risks of NTDs and OFCs. Given that potato is commonly consumed around the world, improper preservation and use should be a matter of concern in respect of the potential teratogenicity.” ~ National Center for Biotechnology Information

How to Store Potatoes:

Tips for eating or cooking potatoes:

First of all, do note that potatoes can be good for us but it is best not to eat lots of them daily and for sure not to eat potato chips and french fries.  Also, if you are having a baked potato it is all that you put on top of it that can be fattening.

It is best not to peel them because the skin contains all the nutrients and good fiber. Simply scrub the potato under cold running water, remove eyes or bruises with a knife. To avoid the darkening that occurs when exposed to air, clean and cut just before cooking.

Potatoes react with certain metals such as iron or aluminum pots and carbon knives, causing them to discolour. 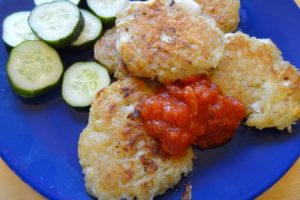 Diana’s Vegan Potato Latkes – This Potato Latkes recipe makes a delicious and fun vegan dinner.  Usually this recipe would include eggs but I like to cook without eggs for a number of reasons.

Curried Green Beans and Potatoes – Green beans with carrots and potatoes become extra special and yummy made into a simple curry.

Learn more about some of the healthiest vegetarian vegetable foods you will always want to have in your pantry or growing on your deck.

1 thought on “Potatoes are Surprisingly Good for You!”