You can mash them or bake them, or give them a quick fry, sweet potatoes are delicious and full of health benefits too! This starchy superstar is a delicious treat and has become a sentimental staple at Thanksgiving dinners. The good news is that they are actually very nutritious as well as being exceptionally delicious. 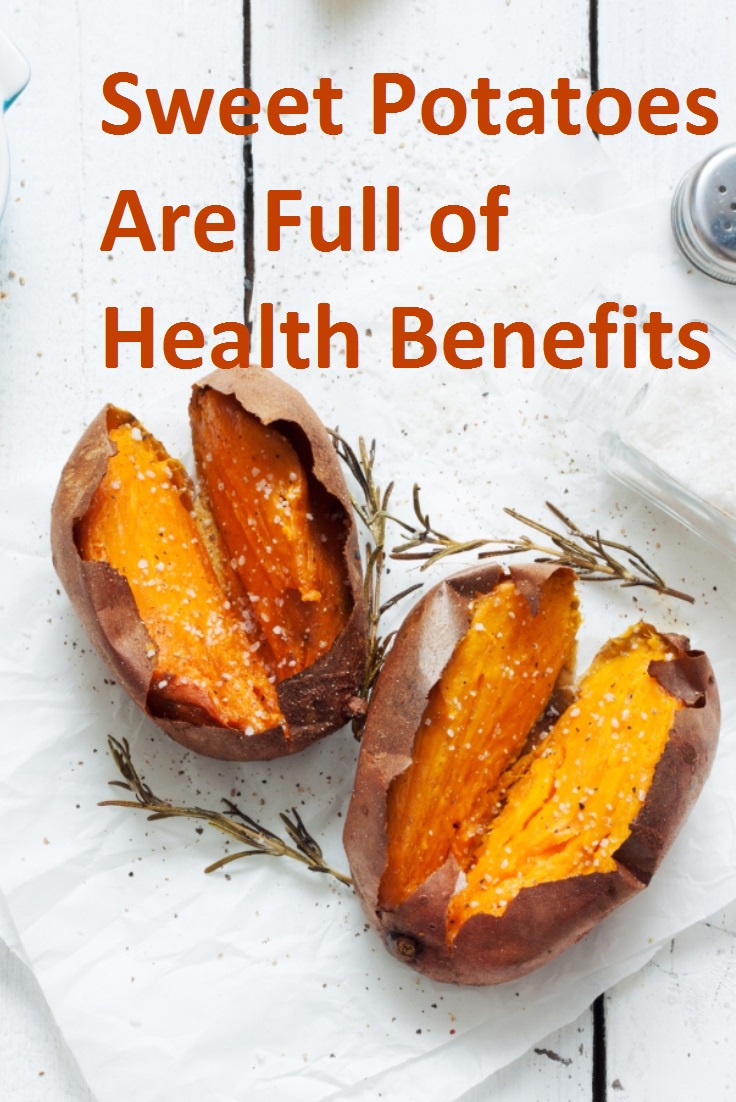 Read on to discover their health benefits, their history and trivia, and tips for cooking them just right.

Don’t let the ‘sweet’ in a sweet potato scare you.
They actually have a lower glycemic index than white potatoes. That means they are less likely to produce insulin resistance and its accompanying health problems, including weight gain. They are a smart carb, very rich in carotenoids, vitamins A, B6, C, potassium, iron and fiber. They provide a wealth of health benefits and are a great addition to your meals.

Did you know that the sweet potato was cultivated and consumed before the white (Irish) potato?

Yes, they are sweet, but they have a low glycemic index meaning the sugar is released slowly into the bloodstream. Most consumed starchy foods raise blood sugar rapidly; with sweet potato, you will not get a blood sugar spike, but you will get a steady amount of energy. Research at the College of Agriculture and Life Sciences found the Beauregard sweet potato to be a low-glycemic index food.

A study of 61 people with type 2 diabetes saw that those who took the extract, Caiapo, from the sweet potato daily for 3 months had their blood sugar drop with no significant adverse effects.

Caiapo has been used without medical prescription for years in Japan as a food additive for prevention and treatment for diabetes.

“We’re hoping that diet, particularly the consumption of sweet potatoes, will become a more widely used tool in the treatment of diabetes. It has the potential to be more cost-effective than drugs.” – Dr. Jon Allen, CALS professor of food science.

They are high in vitamin C, Beta Carotene and vitamin E that support a healthy immune system and are powerful disease-fighting antioxidants.

They are a great source of B6 vitamins, which break down homocysteine, a substance that contributes to the hardening of blood vessels and arteries. – Harvard University School of Public Health.

Also, being a good source of potassium, they help the heart by lowering blood pressure according to the American Heart Association. Potassium is also an important electrolyte that helps regulate your heartbeat.

5. Reduce the Chances of Stomach Ulcers

Functional Foods in Health and Disease did a study in 2012 on how effective then sweet potato was in healing an ulcer. The sweet potato had a potent ulcer healing effect!

They are a good source of dietary fiber, which slows down digestion so you eat less. This also helps with regular bowel movements.

A study found the extract of the purple sweet potato to be anti-inflammatory.

A Sweet Potato is High in Beta-Carotene (Vitamin A)

1 cup Sweet potato, cooked, baked in skin = 769 percent daily recommended intake of Vitamin A, according to the U.S. Food and Drug Administration.

Vitamin A is an antioxidant that protects cells from damage caused by free radicals believed to contribute to some chronic diseases.

According to the U.S. National Library of Medicine, Beta-Carotene also Helps with the Following:

8. Creates Healthy Skin, Hair, Teeth and Bones
9. Promotes Good Vision because it produces the pigments in the retina of the eye.
10. Helps with Anti-aging
11. Cancer Prevention. It is best for the beta-carotene to come from real food as the supplements don’t seem to reduce cancer risk. Beta-carotene may reduce the risk of breast cancer and ovarian cancer.
12. Decreases Asthma Symptoms Caused by Exercise.
13. May Help Protect Against Sun Damage, according to a 2004 study in the Medical Journal.

When eaten in moderation and prepared in a healthy way (not just indulging in sweet potato fries), they are nutritious, without significant health risks. They are high in carbohydrates, 1 cup of cooked sweet potato has 180 calories and for comparison, one cup of cooked broccoli has about only 55 calories.

They have a moderate to high amounts of oxalates which may increase the risk of oxalate-crystal kidney and gall stones.  For most of us this is not a problem if we have a healthy kidney and gall bladder.  Read: How to Prevent Kidney Stones

And now we know where our beloved sweet potato pie comes from!

They have a very high amount of beta carotene which gives us many health benefits (healthy skin, hair, teeth, bones, vision, plus helps with anti-aging, cancer prevention, decreases asthma symptoms and protection against sun damage).

How do we get the most beta carotene from a sweet potato?

It is best to cook them to get the most beta carotene, but not all methods are equal.

To confuse the issue, raw sweet potatoes contain the most beta carotene (see this chart at the U.S. National Library of Medicine).

So why not just eat a raw sweet potato?

The problem is that they have an enzyme inhibitor that stops the trypsin enzyme in your body from digesting proteins. This protein inhibitor is broken down in the cooking process; heating to 194 degrees Fahrenheit for several minutes inactivates trypsin inhibitors.

A raw sweet potato can make you fart!

Which Cooking Method Makes Available The Most Health Benefits of Beta-carotene?

Get the Health Benefits of Sweet Potatoes with Tasty Recipes

Sweet Potato Salad    This is a refreshing and filling salad.
Crispy Sweet Potato Chips are Tasty – Being a big fan of sweet potatoes, these sweet potato chips are such a fun food to eat. They are easy to make too. They are can be part of a meal or good party food served with a dip such as guacamole or pesto.