Grapefruit is full of health benefits and it helps with weight loss! Also, grapefruit helps lower cholesterol, fights heart disease and so many other things. It is a powerful superfood.

Remember when a person gorged on grapefruit in the 1980s and seriously lost lots of weight?  It was highly restrictive but it turns out all those restrictions were not necessary, learn more below.

Eat half a grapefruit before each meal; it can help you lose up to a pound a week before sensible meals!

Or eat whatever you usually do and lose 3.6 pounds in 12 weeks. – Research at the Nutrition and Medical Research Centre at Scripps Clinic

Strangely, researchers are not sure how this works. They do know something in the grapefruit balances your insulin levels.  This could certainly cause weight loss but there may be other factors involved also.

“So far I’ve always kept my diet secret but now I might as well tell everyone what it is. Lots of grapefruit throughout the day and plenty of virile young men at night.”  – Angie Dickinson

We know grapefruit is helpful for weight loss. Grapefruits are also full of pectin, nutrients, and are low in calories and contain no saturated fats or cholesterol. On top of all those wonderful elements, they have many health benefits.

White grapefruit contains a high amount of the flavonoid, naringin, which inhibits the activation of a cancer-causing enzyme. Pink grapefruit has some too, along with the antioxidant lycopene.

Limonin, grapefruit pulp powder, and the flavonoid naringin, were examined in a study in relation to colon cancer cells. The scientists concluded that eating grapefruit may help to suppress the development of colon cancer.

A study has shown that the citrus flavonoid naringenin stimulates DNA repair in prostate cancer cells.

It is full of pectin which binds to heavy metals, flushing them out in the digestive process. A study was performed with hospitalized children between the ages of 5 and 12 years who had high blood serum levels of lead. They were given three dosages of citrus pectin per day for 28 days. The scientists found that there was a dramatic decrease in blood serum levels of lead as a result.

Full of vitamin C, to help keep colds at bay

Grapefruit contains glutathione, which helps the liver detoxify harmful chemicals.
According to research at Massachusetts General Hospital it may even help combat hepatitis C infection.

“Phytonutrients in grapefruit, called limonoids, inhibit tumor formation by promoting the formation of glutathione-S-transferase, a detoxifying enzyme. This enzyme sparks a reaction in the liver that helps to make toxic compounds more water soluble for excretion from the body.

Since those with chronic Hepatitis C are at a greater risk for developing cancer of the liver, inhibiting tumor formation is especially important. By helping the liver clear out cancer-causing toxins, limonoids’ promotion of detoxification enzymes is a simple way to ward off the development of cancer.” ~ Hepatitis Central 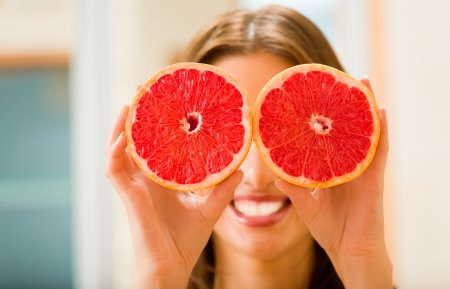 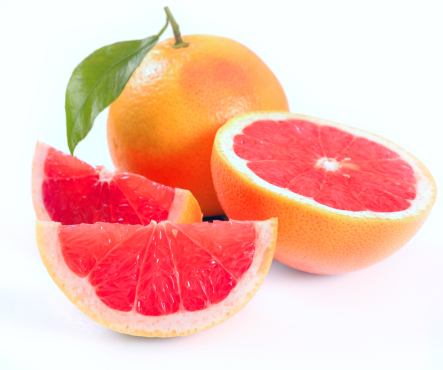 How to Choose a Sweet Grapefruit

They have a reputation for being sour and bitter, which can be a bit of a turn-off. If you learn how to choose a tasty grapefruit and some delicious ways to eat them, grapefruits can be sweet!

“Life is like a grapefruit. Well, it’s sort of orangy-yellow and dimpled on the outside, wet and squidgy in the middle. It’s got pips inside, too. Oh, and some people have a half a one for breakfast.” ~ Douglas Adams

Now you learned about the grapefruit health benefits, and know how to select the best, sweetest grapefruit, you have lots of good reasons to include it into your diet!

Here Are Three Delicious Grapefruit Recipes For You

Delicious Beautiful Avocado Grapefruit Salad– This tasty salad is so beautiful. Red grapefruit is full of lycopene, which is more easily absorbed with some oil, thus the avocados and olive oil.

Healthy Homemade Grapefruit Juice – Store-bought grapefruit juice with sugar and added preservatives is not healthy. Also, it has usually been brought to a high temperature to preserve it, which reduces its nutritional value. The best way to have a healthy glass of grapefruit juice full of health benefits is to make it yourself. You do not need a juicer. In fact, using a blender is better because a juicer removes the pulp, which is full of nutrients.

Delicious Winter Grapefruit Smoothie – How about a colourful fruit breakfast filled with nutritious greens, grapefruit, orange and flax seeds? This nutritious smoothie is very filling too.

Juicy Oranges are Full of Health Benefits for You– Delicious, juicy oranges are a healthy treat!  They are for sure a very healthy superfood as they help fight cancer, fight viral infections, relieve constipation and much more.

1 thought on “Health Benefits of Grapefruit: Weight Loss and Much More”