Modern research has proven that sage does boost our memory. Thus, verifying what herbalists have been saying for centuries about sage being good for the brain and memory to be true. So, this superfood is valuable.

“singularly good for the head and brain and quickeneth the nerves and memory”.  ~  John Gerard, herbalist,  1597

‘Salvia lavandulaefolia’, the Latin name for sage means to protect the ‘chemical messengers’ that take information to the brain for memory.

Learn the many health benefits of this tasty herb.

The Department of Pharmacology and Applied Medicine did a study with a group of 67 people, 34 took a sage extract capsule every 8 hours for 2 months. Those who took the sage saw a noteworthy improvement of 19% in cholesterol levels while the control group had no significant changes.

A memory test showed that those who took sage oil capsules achieved better results than those who hadn’t. – Study at the University Of Newcastle Upon Tyne in June 2003.

“This proves how valuable the work by the old herbalists is, and that they shouldn’t just be ignored because they were writing centuries ago.  This research has serious implications for people suffering from Alzheimer’s disease, as it will inform drug research and development.” said research team leader Nicola Tildesley.

The research found sage to be helpful with memory; it was only natural to test it out with the Alzheimer’s condition.  In a study, people with mild to moderate Alzheimer’s disease were given either sage extract or a placebo for 4 months.  There was a very good improvement in cognition as well as a reduction in agitation compared with the placebo group.

Research found that participants with poorly controlled type 2 diabetes had a positive effect after taking sage. After 2 hours of fasting, blood sugar levels were significantly decreased compared with the control group.

These Sugar Substitutes May Cause More Diabetes Than They Help

Thirty women who had menopausal hot flashes and night sweats were given an extract of sage and alfalfa. The results were that in 20 women all symptoms disappeared and the remaining 10 showed some improvement.  – Italian study,1998.

Then in 2011 practices in Switzerland with 71 women with at least five hot flashes a day were given a dose of fresh sage daily for 8 weeks; the hot flashes decreased by 50% after 4 weeks and 64% after 8 weeks.

A combination of sage and rhubarb extracts were used in a study of 149 patients, the results showed that it was more effective than Zovirax cream, a prescription medicine used for lessening herpes cold sores.

7. Healing for a Sore Throat

Sage throat spray used in a study of 286 patients to compare the usefulness against a placebo for very sore throats.  The 15% sage spray was found to be more effective in getting rid of throat pain.

History has said that sage is a healing herb from curative for snake bites, epilepsy, intoxication, worms, and intestinal problems, and even as an aphrodisiac.

Also, sage tea is said to be good for treating colds and fevers, headaches, and indigestion.

I have a recipe for making sage tea below or this is also a great sage tea from Amazon: Celebration Herbals Sage Leaf Tea Organic

It has many volatile oils, (including apigenin, diosmetin, and luteolin), and Omega 3 and 6 fatty acids.  Also, it is an excellent source of vitamin K and a good source of vitamin A. For more information: Sage Nutrient Details. 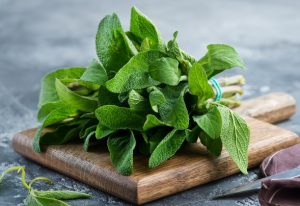 For thousands of years, Sage has been consumed by countries surrounding the Mediterranean Sea and is native to these countries.  Sage has one of the longest histories of any medicinal herb in medicinal lore.  The healing properties of sage were said to have been highly prized by Greeks and Romans.  It was treated as sacred by the Romans who created a special ceremony for gathering sage. It was also used as a preservative for meat by both civilizations, a tradition that continued until the beginning of refrigeration. Science is just now starting to confirm what these cultures knew from experience, that sage is helpful at reducing spoilage.

Throughout history, Sage’s legendary status continued. In the 10th century, Arab physicians believed it granted immortality, while 14th century Europeans used it to protect themselves from witchcraft. During 17th century China, sage was in such high demand, appreciated for the delicious tea beverage it makes, three cases of tea leaves reportedly were traded for one case of sage to the Dutch. To this day sage is still regarded with high esteem.

How to Select and Store

Fresh sage is best, better than dried for flavor. Make sure the leaves are fresh and a vibrant green-gray with no dark spots or yellowing.

When buying dried sage, select organically grown sage so you know that it has not been irradiated.

Wrap fresh leaves in a damp paper towel inside a lightly closed plastic bag in the refrigerator; it will keep fresh for a few days.  Keep dried sage in a tightly sealed glass jar in a cool, dark, dry place for about six months.

Tips for eating or cooking

Sage has a very delicate flavor so add it near the end of the cooking to preserve its essence.

Use it fresh or dried (whole or ground), adding some sage to a dish will enhance the flavor with no added calories or sodium.

Boost your memory by adding some sage to your stews and soups or drink some sage tea.

Sage Recipes for You

yourself a cup of this tea. Savory sage tea for your memory is simple to make, all you need is fresh or dried sage leaves, water, and honey or stevia if you want to sweeten the strong flavour.

Cranberry Celery Onion Gluten-Free Stuffing – This stuffing is so yummy and a great addition to a festive meal. This delicious gluten-free stuffing makes a holiday meal special and memorable.  Try this healthy recipe and you will satisfy both the difficult and easy to please!

Also, try these other great teas: 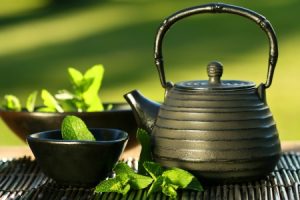 Fresh Mint Tea – This fresh mint tea is a traditional tea in many desert countries like Morocco, Turkey, and Egypt. They drink this because it is so cooling. Mint is not only cooling, but also energizing, refreshing, and good for digestion.

Dandelion Tea – You can easily make a dandelion with dried leaves from the plants which are full of nutrition.

Basil Tea – Basil tea is helpful for when you have nausea and flatulence. The magic ingredient is basil. Basil has been considered to be ‘The Oldest Herb’. It has been used for health reasons and for its distinct flavour which is delicious. It is one of my favorite herbs to use in my kitchen.