According to Japanese mythology, miso is a gift from the gods. That means it’s really good for you and the Japanese like it and highly value it.

We should like it too!  It has been a staple part of the diet in the Far East for centuries. Because it is a fermented, living food; its flavour improves in time, much like a fine wine.

In Japan Miso is Considered To Be a
‘Gift From the Gods!’

What is Miso?
•    It is a fermented paste of soybeans and either barley or rice with salt. 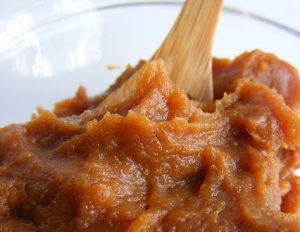 •   It is cultured and a fermented soy food that helps digestion by  adding  Lactobacillus acidophilus (the good kind of bacteria also found in yogurt)
•    Full of lecithin, linoleic acid, and B12 and is high in protein.
•    Research has also shown it to be effective in treating some forms of cancer, heart disease and reduce the possibility of developing stomach ulcers.
•    It can slow the aging process which may be one reason the Japanese are known for their longevity.

Soybeans can be difficult to digest so miso’s fermentation process enables the soybean to be assimilated more easily by the body.

“People Who Consume Miso Regularly Are More Resistant to Radiation,” says Yomiuri Shinbun in his book: Miso Protects Against Radiation.

“I don’t know specifically what element in miso is effective…… study indicates that miso is a preventive measure against radiation.” Professor Watanabe told the South Western Japan Conference on the Effects of Radiation.

Is a Valuable Food 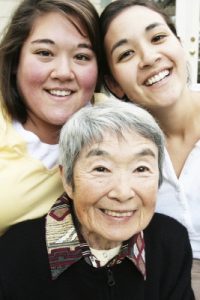 Soybeans are full of high-quality protein and other nutrients, but these nutrients are unavailable to the body when the whole beans are served in their baked, boiled, or roasted forms.

When the soybean goes through the process of natural fermentation, they go through a transformation in which almost all of their complex protein, carbohydrate, and lipid (oil or fat) molecules are broken down into readily digestible amino acids, simple sugars and fatty acids.

A CUP DAY KEEPS THE POISONS AWAY
From being in Japan I experienced that for them a cup of Miso soup in the morning starts the day not a cup of coffee.  It was not that long ago, that the Japanese made their own at home and had pride in their home-made Miso.  Rice and miso are the staples of the Japanese diet. The production volume in Japan is about 600,000 tons and about 3,000 tons are shipped overseas.

The Japanese believe health is dependent on eating habits and we are finally realizing the truth of that. They are known for their longevity in the world and much of this can be attributed to the health benefits from Miso. They have ancient sayings about how it helps the body in sayings like “a detoxicating drug in the morning” or “doctor killer”.

A study by Japan’s National Cancer Center reported that people who eat miso soup daily are 33 percent less likely to contract gastric (stomach) cancer and 19 percent less like to contract at other types than those who never eat miso soup. The 13-year study involving 265,000 men and women over forty, also found that those who never ate miso soup had a 42 percent higher death rate from coronary heart disease and higher mortality from all other causes.

2 General Types Based on Colour & Taste

1. Sweet, light coloured misos have been aged for less time, is higher in Koji culture and carbohydrates, milder in taste, lower in salt. It is good for salad dressings and other summer cooking.
Sweet misos are also ideal for those with delicate digestive systems. A very diluted sweet miso broth can be tolerated by children as young as six months. Genmai, kome, shiro, and sometimes rice are all light misos.

2. Darker misos are aged longer (2-3 years), has a stronger flavour, higher salt content and lower koji content. They are higher in protein and stronger in flavour. 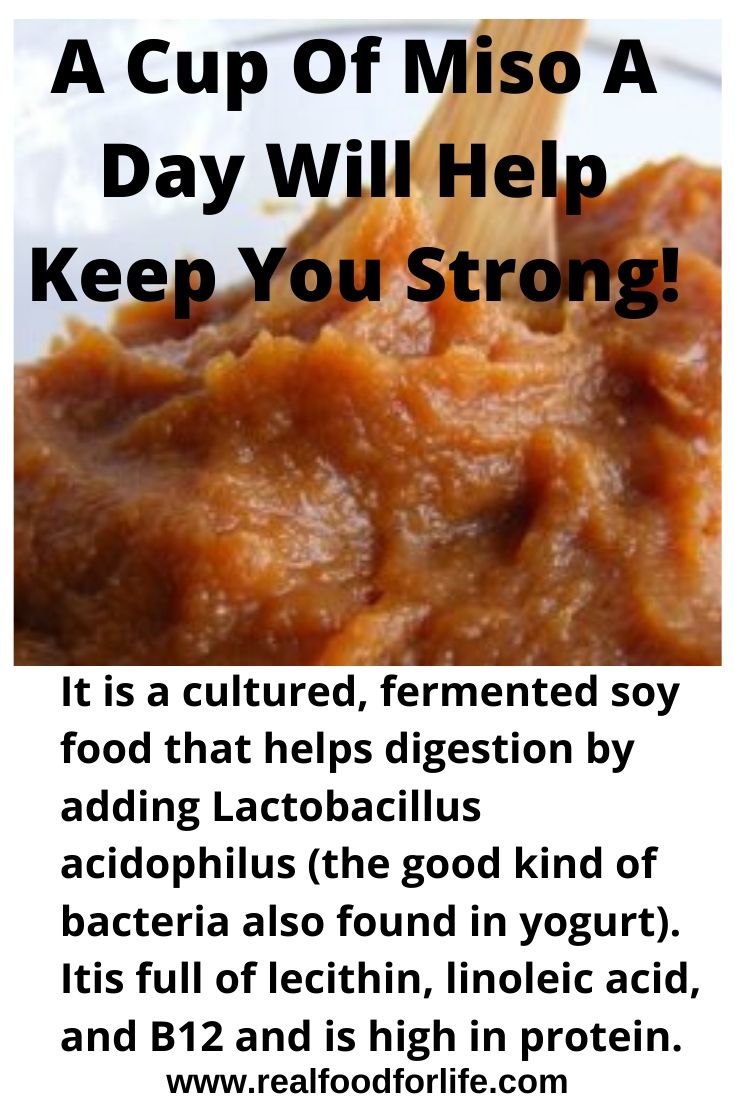 7 Main Varieties (either light or dark): 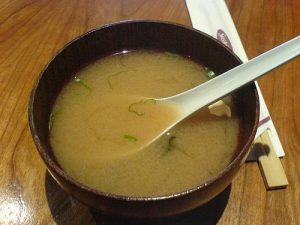 Soba Soup – a Japanese Favourite – If you want a delicious noodle soup recipe that is gluten-free, and perhaps even grain-free try this soba soup.  This soup is made with buckwheat noodles.

Miso Soup With Spinach & Mushrooms – We have come to think of Japanese food as being tempura, teriyaki, and sushi but it is miso soup that the Japanese will not want to live without. Originally, miso soup was served as a breakfast food.

Miso Sauce: This is a very simple and quick sauce to make.  The taste will vary greatly depending on which type of miso is used.  For a very light flavoured one use Shiro miso but really any miso will work. This recipe is an all-time favourite of mine as it is so easy. I’ve been making it for at least 31 years!   (now stop calculating my age)

Shiitake Mushroom Soup is Savory and Delicious -This shiitake mushroom miso soup is a delicious start to a meal and it is full of many health benefits from the mushroom, seaweed, miso, and ginger. It is a delicious superfood soup for you. Exotic shiitake mushrooms have been part of the diet in China, Japan, and Korea for thousands of years!  Their medicinal and health benefits are proven, from boosting the immune system to fighting cancer.

1 thought on “A Cup Of Miso A Day Will Help Keep You Strong!”