Leeks are full of health benefits!  Before living in England, I had never heard of or seen leeks but now they are in all the supermarkets here.  They are one of the many healthy superfoods to include in our meals. Leeks belong to the same family as onions and garlic.

Leek health benefits research has been minimal so most of the benefits of leeks are because of them being in the onion and garlic family, which they share many of the same benefits. They are full of so many impressive health benefits which really surprised me.

The strong and mighty eat their Leeks
That is why they are not Weak.
Be like a poet wise and Meek
Eat healthy food and clearly Speak
Wiser words than the Romans or Greeks!
As you glow with the Health many Seek!
~ Roylin Picou

Leeks have a number of elements that are helpful in preventing and in the treatment of cancer.

They contain organosulfur compounds that have been linked to lowering blood pressure and cholesterol levels. 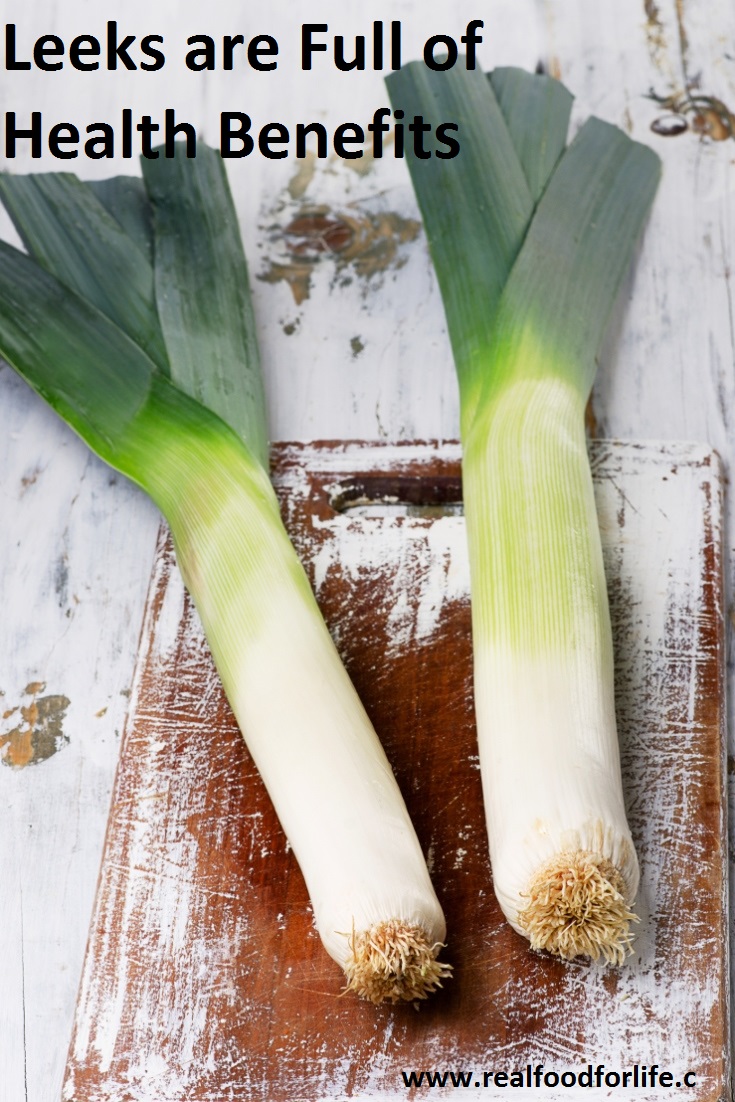 Leeks have inulin and it was found that when the participants in a study consumed inulin they were happier than when they consumed the placebo.

There is a fiber called oligofructose in leeks that helps prevent and treat types of diarrhea according to a 2005 study, published in Clinical Gastroenterology and Hepatology.

They have only 61 calories per serving. Also, leeks are a high fiber food which makes you feel full and takes a long time to digest so you won’t be hungry soon after eating them.

Healthy for your Eyes

Leeks are high in vitamin A which is necessary for healthy eyes. Also, they have an abundance of antioxidants that prevent damage to the eyes.  Vitamin A helps your eyes to see better when the light is low.

Please Note: Leeks are in the same plant family that contains substances called oxalates which are not a big health concern if eaten in sensible amounts; there are cases eating high levels of oxalates can be unhealthy. To learn more read Oxalic Acid Controversy.

For a start, they have only 61 calories per serving with almost no fat. Leeks do have a high quantity of Vitamin K and Vitamin A. Also, they have Vitamin C, some B Vitamins and minerals. 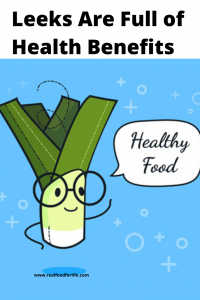 This superfood is so entertaining; with the many leek fun facts.

Leek Fun Facts for You

Now that you have learned a few leek fun facts, time to learn something practical.

How to Grow Leeks

Would you like to grow leeks? They are easy to grow but you may not get such large ones as you just saw in the video above.

First, let’s start by sowing the seeds thinly in potting soil about an inch apart. Cover the seeds with a thin layer of more potting soil, and water them. It is important to keep the potting soil moist so the seeds can germinate and grow.

Place them on a sunny indoor windowsill or in a greenhouse to help them grow.  You can pot them on into individual pots as they grow.

They like moist, light soil with a good quality of well-rotted organic compost.  It is best that the soil is not rich as they will grow coarse and tough with far too much leaf growth.

Best to not grow leeks in the same place every year as there will be a risk of diseases.

Below is a video below showing an amazingly large leek!

Select firm, straight ones with dark green leaves and white necks. Stay away from yellow wilted leeks or ones with cracked or bruised bulbs. Choose leeks with a width of one and one-half inches or less as extra-large leeks can be too fibrous in texture.

Best to store them untrimmed and not washed in the refrigerator for one to two weeks. Wrap them loosely in a plastic bag so they don’t dry out.

Do note that when you have cooked leeks they will not last more than two days in the refrigerator. You can keep leeks in the freezer for three to four months.

Cut off the outer tough leaves, then cut off the root and cut the leek in half lengthwise to make it easier to clean. Rinse under running water. Cut leeks into 2-inch lengths.

Now that you know all the health benefits of leeks, let’s have some for lunch or dinner. It is a delicious vegetable that I use in my cooking meals every week, sometimes just part of my steamed or stir-fried vegetables.

“If you can mock a leek, you can eat a leek!”
– William Shakespeare, Henry

Delicious Leek Recipes For You

Creamy Vegan Potato Leek Soup with Carrots – I created this potato leek soup at the end of September here in Edmonton, it felt like winter was almost here!  This filling and warming soup is perfect for a yummy lunch. The recipe makes a big pot of soup which fed two of us for two lunches. It tastes so good that we also enjoyed it the second day too. Not only is it delicious it is full of healthy real foods too making it a very nutritious meal.

Leeks and Carrots with Ginger and Garlic is So Delicious–Leeks and carrots are for sure favourite vegetables in my kitchen. Pairing them with yummy ginger and garlic makes a very refreshing delicious addition to a dinner meal. Also, all these ingredients are very nutritious for you too. In fact, almost all of the ingredients are superfoods. The first time I served this dinner recipe, it was enjoyed so much that I promised to make it again real soon.