Beautiful Swiss chard with its deep green, red, purple, and yellow leaves and bright coloured juicy stalks is one of the most nutritious superfood vegetables.

“Swiss chard is undervalued in Britain. It’s a great substitute for spinach and keeps its shape well.”  ~ Yotam Ottolenghi

The nutrition benefits of Swiss chard include its many antioxidants, polyphenol, betalain and carotenoid antioxidants which are powerful at fighting free radical damage, inflammation, and disease development.

It is full of antioxidants such as beta-carotene, quercetin, many carotenoids, and betalains.

It was found that Swiss chard extract can stop the growth of cancer cells in the breast, colon, prostate, ovarian, endometrial, and lung tumors according to studies.

The flavonoids in the chard have an arresting action on breast cancer.

Foods high in nitrates which are in Swiss chard have been found to lower blood pressure according to a study.

3. Great for your Bones

When 440 postmenopausal women with osteopenia for 2 years were given Vitamin K in a study, they found they had more than 50% reduction in fractures.

Supplementation of Vitamin K was found to reduce bone loss in research at the University of York, England.

Elderly people who supplemented their diet with vitamin K daily had a 35% lower risk of hip fractures than those who consumed less according to The Framingham Heart Study. 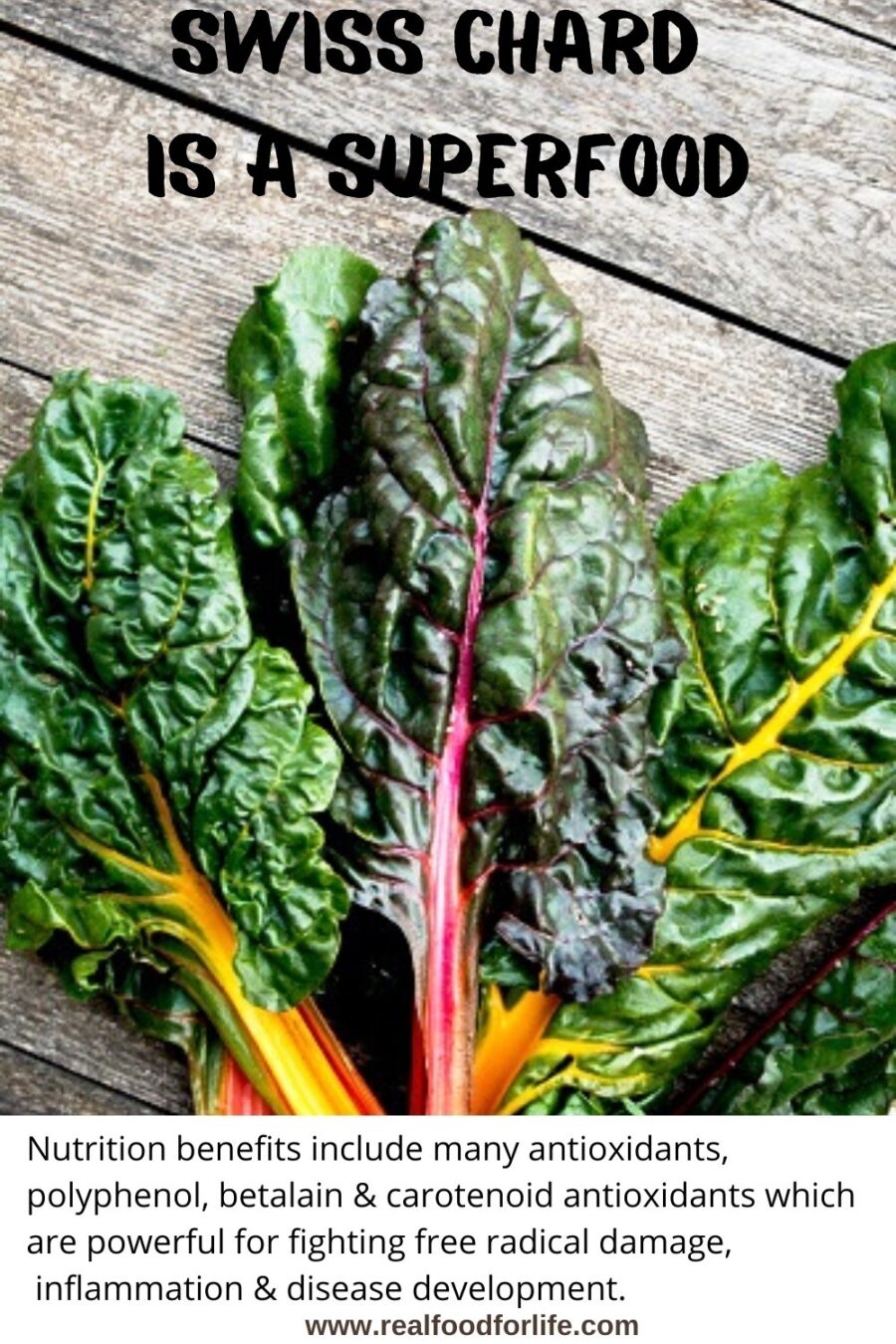 Antioxidants prevent and repair excess oxidation in the body which is a major metabolic process that burns up or combines oxygen and carbohydrates together to produce energy.

There are nineteen types of betaxanthin antioxidants and nine types of betacyanins in chard according to research. Learn more about Antioxidants: Lifesaving Nutrient.

Diabetic patients in a study in Turkey found it reduced the blood glucose levels.

Many of the nutrients in Swiss chard, such as the high level of flavonoids, improves glucose metabolism.

Swiss chard is very high in Vitamin K. The intake of Vitamin K was found to reduce the incidence of coronary heart disease.

They found a reduced risk of coronary heart disease in older men and women in The Rotterdam Study. with Vitamin K.

Although there are many studies done on this the problem in that they are animal studies.  Human studies still need to happen.

Please Note:
Swiss chard is in the same plant family that contains substances called oxalates which are not a big health concern if eaten in sensible amounts; there are cases eating high levels of oxalates can be unhealthy. To learn more read Oxalic Acid Controversy.

Swiss chard is very high in vitamin K (1 cup of cooked chard will give you 636% of your daily need) which is where many of its health benefits come from.  The British Cardiovascular Society has compiled much about the essential benefits of Vitamin K.

Also, it is an excellent source of vitamin A, vitamin C, magnesium, and potassium.

How to Select the Best Swill Chard

You will find the best tasting and fresh Swiss chard in the market when it is in season from June until August. Find a Farmer’s Market near you

Make sure that when you are buying it in a grocery store that it is in a cooler so that it is fresh which will have a crunchy texture and sweeter taste. The leaves are best if they are firm, bright green and do not have any browning, yellowing, or wilted with any holes. The stalks should be thick, look crisp, without blemishes, and can be white, red, purple, or yellow.

How to Store Swiss Chard

It is best to avoid washing it before storing it as the water inspires spoilage. Put it in a plastic bag and wrap it tightly around the chard, taking out as much of the air as possible.  It will keep in the refrigerator for up to 5 days.  When you have lots of chard, you can blanch the leaves and freeze them.

How to Cook Swiss Chard

There are many ways to cook chard, you can braise, steam, sauté or eat it raw by adding it to a juice or a salad. Chop it up and include it in your favorite stuffing mix or pasta sauces. The general rule with chard is to cook the leaves like you would spinach and the stalks like asparagus. To properly wash chard, it is recommended that you wash it thoroughly with cold water, either dunking the whole leaves in a bowl of water until the water is clear, or chop it up and then use a salad washer.

Tips for eating or cooking:

Do not soak chard as this will result in the loss of water-soluble nutrients to the water. Rinse Swiss chard under cold running water. Remove any area of the leaves that may be brown, slimy, or have holes.

Delicious Recipes to Get Greens into Your Meals

Creamy Swiss Chard Soup with Almonds is Delicious – This delicious Swiss chard soup is hearty with the addition of potatoes and is very nutritious too. I love that it is so creamy without the addition of cow’s milk. The crunchy almonds on top adds an extra tastiness. It is a whole vegan meal in a bowl too. This soup is full of very healthy superfoods too. Try this tasty rich soup for dinner or lunch today.

More Greens for You!  Here is a quick, simple to make a recipe of greens with a zingy lemon and a little crunch from the sesame seeds.