On April 29, the World Health Organization raised the pandemic alert level  to five; the second-highest level.  Millions of people around the world are scared. What should you do? Well first, you should NOT BE FEARFUL,… for a number of reasons.  I listed 5 big ones below.  I've also explained 7 practical measures that you can implement to deal with this and many more situations.

5 reasons you should NOT be Afraid:

1. Fear just doesn't work. It is unhealthy and unproductive. There is a LOT of false evidence and unsubstantiated rumours which the media has inflamed.  The fear and stress about this situation can have more effect than the flu.  Please don't participate in that.
2. If you are reading this post you are already probably someone who has been working to bring balance into your body and life for some time.  This is the best possible defence against this kind of problem and you have already achieved that. Relax.
3. This is not the first outbreak of swine flu and it won't  be the last. Better to have a long term plan for keeping yourself healthy rather than reacting to each small problem… because they are guaranteed to keep coming.  The last outbreak of swine flu in 1976 actually killed LESS people than the massive swine flu vaccine campaign which the government implemented to stop it!
4. The only fatalities have been in Mexico and from Mexico which has a totally different climate, culture and economic situation from the rest of the world.  Real statistics about who actually has the flu and what kind of lifestyle and food intake these people had been living with is just not available yet.  All organisms thrive best only in unique certain environments.
5. There were 91 fatalities (the day before this was written) and the warning medical reports coming out about this situation seem to know a lot about this particular kind of flu virus – BUT lets keep this in perspective.  This is the same medical system in which 195,000 people died every year (2000, 2001, 2002) due to preventable in-hospital errors.  In the US, 32,000 die from adverse reaction to prescription drugs every year and 20,000 people die each year from the common flu.   There are a LOT more important issues that you could be addressing.  For example, the second leading cause of death in the US in 2000 (after tobacco) was POOR DIET and PHYSICAL  INACTIVITY which claimed 4000,000 deaths. Why is not the media clamoring over these statistics?   Mostly because it is not NEW and therefore not news.

7  Actions You should be doing Anyway:

1. Eat a wide variety of WHOLE LIVE FOODS.  Add whole food supplements if these are available.
2. Reduce stress in any way you know how.   Whatever it takes it's worth it!
3. Get enough rest.
4. Get daily exercise – best outside in the fresh air, sun, and nature.
5. Decrease non foods such as sugar and alcohol which inhibit the immune system.
6. Avoid quick fix solutions for your health. Echinacea, for example, stimulates your immune system but doesn't necessarily strengthen it long term.  It also happens to increase a certain immune response that researchers have found interacts with the swine flu virus in a negative way.
7. Avoid eating foods that have been produced in large commercial enclosed animal farms.  It's NOT that you can contract the virus directly from these foods but many health professionals suspect that this virus (and many more) were incubated in the unnatural living conditions of these businesses.  I don't want to support these kind of conditions and I know that eating a lot of food from these unnatural situations doesn't help to regenerate my body.

If you are doing even some of these seven actions you are way ahead of the crowd.  Relax, enjoy and focus on productive things in your life. Copyright © Randy Fritz  You are welcome to share this article with anyone who you think may benefit from this information as long as you give credit to Real Food for Life by including the link to the home page www.RealFoodforLife.com or the direct link to the post Swine Flu

10 thoughts on “Swine Flu… What Should You Do?” 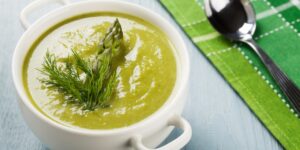 Cream of Asparagus Soup Is Extremely Delicious, Vegan and Healthy Too 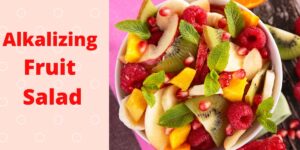