A study in the journal Microbiome found that a ten-second French kiss can spread 80 million bacteria between mouths. 80 million may sound scary but these bacteria may actually benefit your body.

What was interesting is that they found the bacteria on the tongues of couples were more similar than of two strangers. “Apparently, being with somebody for an extended amount of time and having a relationship leads to a similar collection of bacteria on the tongue.” – Professor Remco Kort, lead researcher, Netherlands Organisation for Applied Scientific Research.

To find see how similar the shared bacteria were, the researchers did one more test. One person in the couple drank a probiotic yogurt drink containing bacteria called Lactobacillus and Bifidobacteria and wait a bit and couple shared a 10-second, French kiss. Then they took a sample of the bacteria in the mouth of the partner who hadn’t drunk the yogurt. What the researchers found was that the volume of bacteria transferred to the other partner was on average 80 million bacteria!

Quantity and Quality of Kisses Make a Difference

The research team also found out through questionnaires that the more often a couple kisses, the more bacteria they share. Dry, prudent kiss only transfers 1,000 bacteria and a French kiss will give millions of bacteria!

Even though bacteria in the saliva changed quickly after a kiss, the bug populations on the tongue remained more stable.

“French kissing is a great example of exposure to a gigantic number of bacteria in a short time. While 80 million bacteria being transferred in just one kiss sounds scary, it is in fact probably a good thing, acting as a form of immunisation and building resistance from exposure to different microorganisms.” says Professor Remco Kort.

“If you look at it from this point of view, kissing is very healthy,” added Prof Kort.

Would you like to know how much bacteria you and your partner are sharing? There is a “Kiss-o-meter” set up in Amsterdam based on this research that will rate your kisses: Micropia. They will give you a read out of the microorganisms you’ve exchanged. 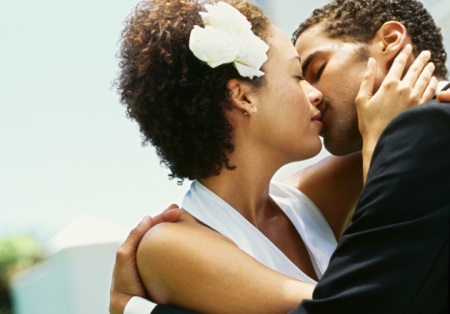 Not Enough Kisses In Your Life?

Maybe you and your partner need a little help with healthy food aphrodisiacs like honey, almonds or chocolate. Learn how to make chocolate treats without the sugar at the Healthy Chocolate Project.

If there is no one for you to be kissing… not to worry. There are many ways to get probiotics and prebiotics into your diet and boost your immune system in general.
Most fruits and vegetables contain a lot of fiber so provide a health bacterial environment in your digestive tract. Ghee is particularly good at feeding healthy bacteria and your immune system.

Check out my Free Health Webinar on how to keep your immune system strong in the winter.

Learn about the fun Benefits Of Kissing