Pumpkin is a superfood with an abundance of health benefits. They become very popular in the fall, first for Thanksgiving for pumpkin pie in Canada and then for Halloween.

This large vegetable is loved by everyone! Whether you are growing a 2,623.5 pound pumpkin, eating a delicious bowl of Pumpkin Stew or going for a second piece of pumpkin pie we know it is a special food in the fall. This pumpkin superfood is full of antioxidants to help you reduce the risk of cancer and the right nutrients for healthy eyes and beautiful skin. 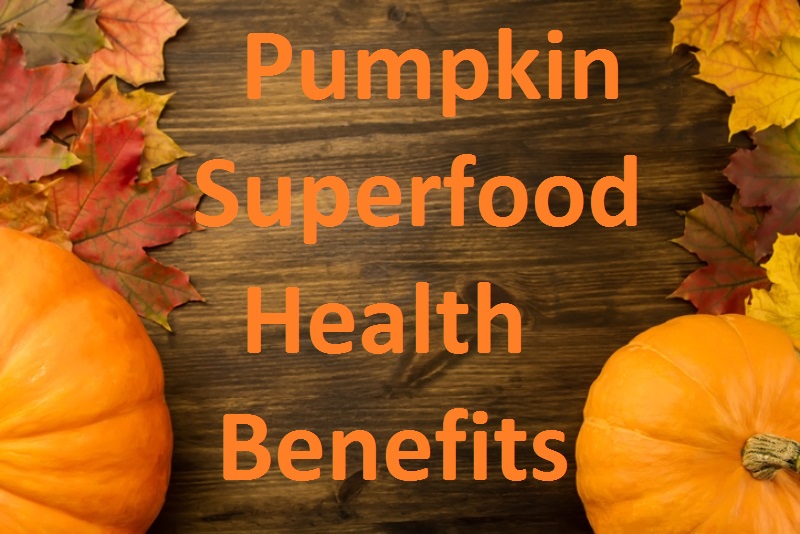 High in Anti-oxidants – May Lower Risk of Cancer

What science tells us is that cancer cells create free radicals that help them multiply.

This superfood is high in beta carotene which is also known as carotenoids. It acts as antioxidants thus neutralizing free radicals, which can protect against some cancers.

It was found in 13 studies that people with higher intakes of beta-carotene and alpha-carotene had a much lower risk of stomach cancer.

Other studies found that people who had higher intakes of carotenoids had lower risks of esophagus cancer and pancreatic cancer.

Pumpkins with their dense amount of beta-carotene may play a role in cancer prevention, according to the National Cancer Institute.

Also, beta-carotene has been shown to stop the development of colon cancer in Japan.

It has been found in studies that beta-carotene can act as a natural sunblock.

“Photoprotection through individual dietary components such as β-carotene or lycopene in terms of sun protection factor is considerably lower than that achieved by using topical sunscreens. However, an optimal supply of antioxidant micronutrients in the skin increases basal dermal defense against UV irradiation, supports longer-term protection, and contributes to the maintenance of skin health and appearance.” ~ Wilhelm Stahl

Eyesight often diminishes with age. The good news is that eating the correct nutrient-rich foods can lower this risk. Pumpkin is full of nutrients linked to strong eyesight.

A survey of baby boomers found that over half of them did not know how important nutrients in their meals played for eye health.

“Therefore, it is important to educate this population and to create an awareness of the nutrients and foods of particular interest in the prevention of age-related eye disease.” – Lesley University, Cambridge, MA, USA

It was found that age-related macular degeneration which causes blindness is developed more for those with a deficiency of vitamin A.

Scientists found that people who had more beta-carotene in their diet had a lower risk of cataracts which again can cause blindness. This was what they found in analyzing 22 studies.

The high amount of vitamin A aids vision, particularly in dim light according to the National Institutes of Health.

It is full of nutrients that can nourish your immune system. It is high in beta-carotene, which turns into vitamin A.

It has been found in studies that vitamin A can make your immune system stronger and fight infections. It was also noted that having a vitamin A deficiency can weaken the immune system.

There are two more vitamins that pumpkin is a good source of vitamin E, iron and folate which have been found to help the immune system too.  According to Bayer Consumer Care Ltd, Switzerland.

This pumpkin superfood contains many nutrients that are good for your heart health.

It is high in antioxidants, that can help protect “bad” LDL cholesterol from oxidizing. When LDL cholesterol oxidizes it restricts your blood vessels raising the risk of heart disease.

It is full of good fiber, which helps you feel full and satisfied for longer. Sugar absorption is slowed down in the blood so it is more beneficial for digestion. Fiber is good for helping with weight loss and is low in calories; 1 cup cooked pumpkin only has 49 calories.

It Is a Smart Carb

If you cook it right and don’t add white sugar or artificial sweeteners, it is a smart carb. Learn all about Smart Carbs.

All of the above benefits from this alkaline superfood. Yes, it is an alkaline-forming food.

Please Note:
Pumpkin is considered safe for most people. One thing men may want to know is that it may cause ejaculation problems in some men.

It is a ‘Low Fat Food’: Less than 15 percent of calories come from fat (if you don’t have a scoop of ice-cream on it).  What’s more, pumpkin is a good source of fiber, which can help curb your appetite.
1 cup cooked, boiled, drained, without salt 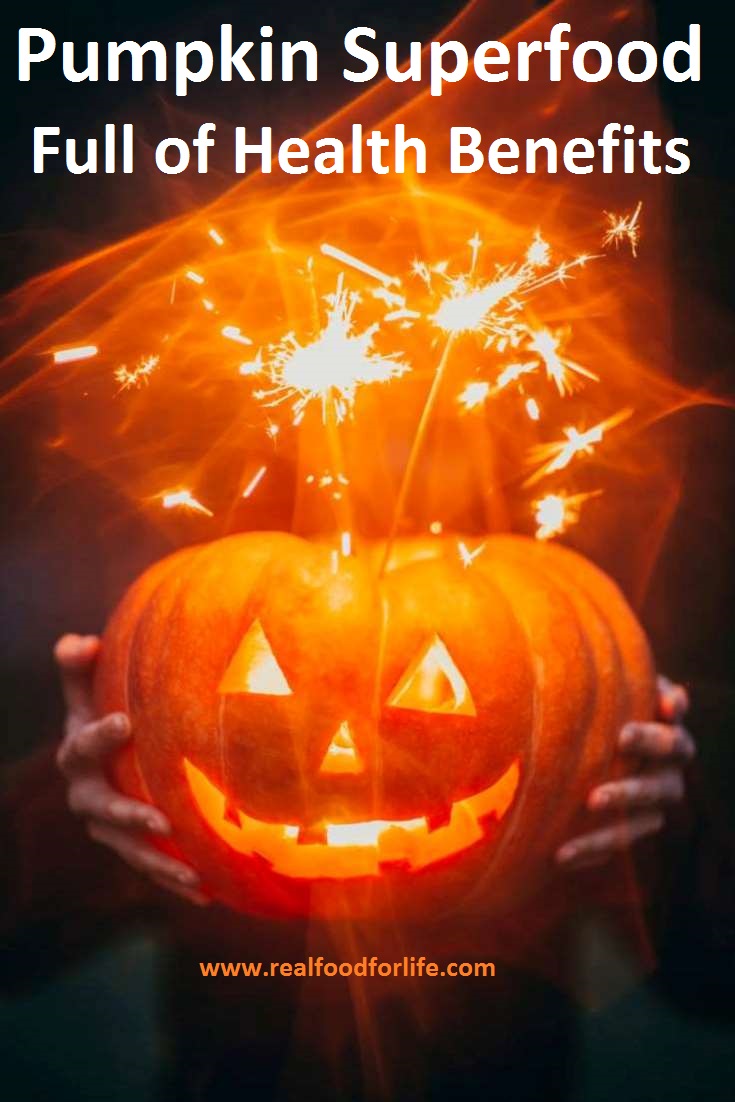 Are Pumpkins Magic
Are you ready for Halloween?

It is best to get the small “sugar” pumpkins for making puddings and pies as they have more flavour than those very large pumpkins we use for Halloween.

The small ones are packed with more flavour and not watery like the large pumpkins. They are sweeter and become nuttier when roasted. Its flavour is similar to a sweet potato but with more of a squash texture.

It is fall and pumpkins are in season again! Soon we will see them as jack o’ lanterns for Halloween. Pumpkins are very good for us as they are nutrient-dense and there are many creative ways to add them to your meals.

Delicious Pumpkin Superfood Recipes For You to Make

Delightful Pumpkin Stew For One of Your Fall Meals  – It is ‘Pumpkin Stew’ time because it is fall! This is when I start making lots of stews because they are heartening, nourishing and so easy to make. I have to say that summer is my favourite season, but there is so much beauty at this time of the year. I love walking amongst the beautiful fall leaves.

Delicious Creamy Vegan Pumpkin Soup – With onion, ginger, spices, and sweet pumpkin, this Halloween soup recipe for pumpkin soup is delicious! I love that it is vegan creamy without all that cow’s milk. The pumpkin seeds on top add a lovely crunch. I was given a very large pumpkin and did not know what to do with so much. So I created this fall recipe. I used one-quarter of it in this recipe so I froze the rest for more pumpkin soup later.

Pumpkin Pudding Is Vegan, Gluten-free and Delicious – This pumpkin pudding tastes great by itself or you can also put it in your favorite pie crust making ‘Pumpkin Pie’. What I love about it is that it is vegan and that means no cow’s milk. Also, it is refined sugar-free and full of delicious superfoods. Pumpkin is the main superfood in this recipe which is full of health benefits. Also, it is easy to make.