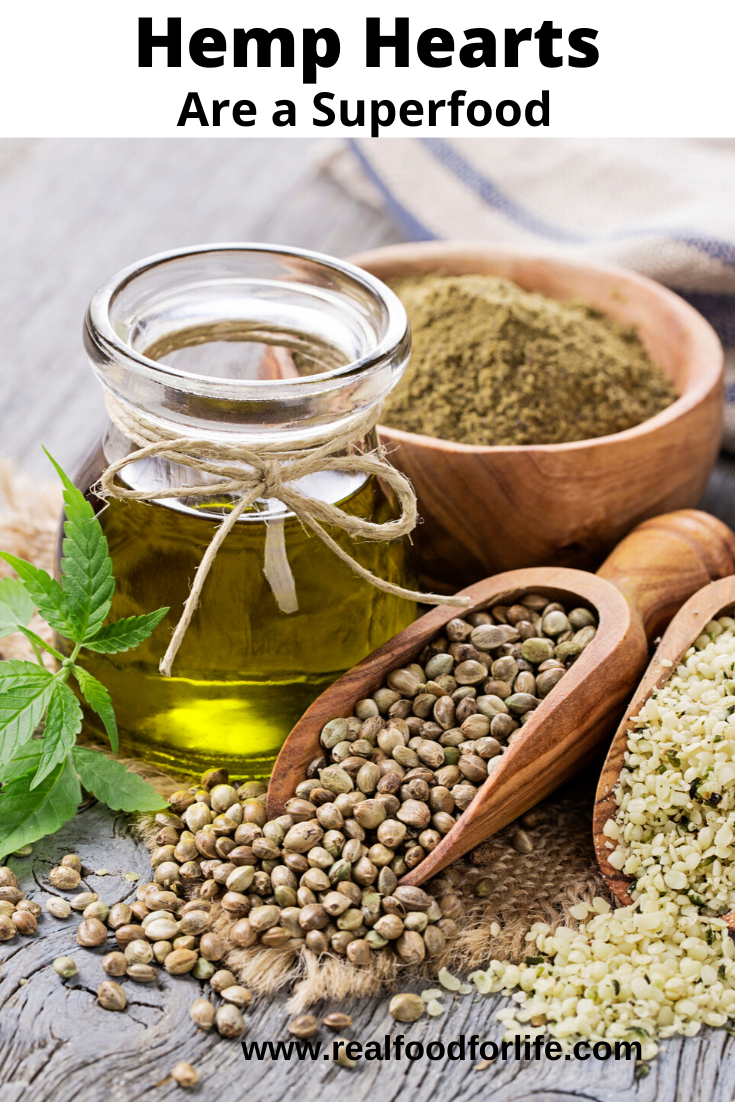 So how come they won’t get us high if they come from the marijuana plant?

“While it may look like marijuana, the hemp plant is actually a different species of cannabis and contains very little of the active ingredient, THC. This inaccurate association has prevented many Americans from fully experimenting with the superfood” says registered dietitian Rene Ficek, the lead nutrition expert at Seattle Sutton’s Healthy Eating in Illinois.

What is the difference between hemp seeds and hemp hearts? The whole seeds from a hemp plant have a crunchy outer shell that is hulled to create hemp hearts.  It can be called hemp hearts or shelled hemp seeds.

It has only been the last few years that I added hemp hearts to my diet; I have to say I love them. They taste good and knowing how nutritious they are, makes them a great addition to my meals. Also, writing this article, I learned about all the wonderful health benefits.

Hemp has been around in people’s diets for hundreds of years and there is very little published research on its physiological effects. There has been confusion about it and legal issues which have stopped the progress of research. That said there is enough research existing to argue for the continued investigation into the therapeutic use of dietary hempseed.

The main ingredients to help build a healthy heart are fiber, healthy fats, plant-based protein, and eating less sugar. Hemp is helpful with all of those. Research recommends that hemp seeds can improve heart health and high blood pressure.

It was found that cannabinoids from hemp seeds prevent cancer growth, mainly in lung cancer. Research at the University of Rostock, Germany. What this shows is that hemp has a cancer-fighting ability. More research is needed.

The CBD in hemp seeds inhibits the spread of human breast cancer cell invasion according to Breast Cancer Research and Treatment. Cut Breast Cancer Risk With These Everyday Habits

Hemp is high in soluble and insoluble fiber which gives sufficient bulk to relieve constipation.  Also, this healthy mixture of roughage nourishes the probiotics in the gut. In a study published in the American Journal of Gastroenterology, people who had extreme constipation were given hemp seed pills.  The research found that a 7.5-gram pill was more effective than a 2.5 or 5-gram pill and that the hemp seed pill treatment was effective for relieving functional constipation.

Good Source of Omega 3 and 6

The hemp seed oil has been found to improve skin health by eliminating flaky, dry, red, skin. The hemp oil penetrates the skin’s inner layers, helping healthy cell growth.  Researchers studied the effect of hemp oil on patients with dermatitis or eczema and found their symptoms improved. – Published in the Journal of Dermatological Treatment.

In one study of 20 weeks, they found that dietary hempseed oil reduced the symptoms and appearance of clinical atopic dermatitis.

Note: The oil does contain some CBD and that won’t work well for some of us. Apparently, if you put it only on your skin you won’t have any experiences. I have to try this and let you know.

It was found that hemp seed oil can be helpful for the relief of the symptoms of rheumatoid arthritis.- Department of Biological Sciences, Konkuk University, Seoul, Korea.

It naturally suppresses appetite by helping one feel full longer according to research. Also, it reduces sugar cravings. It has been recommended to add four tablespoons of hemp hearts to breakfast to control excessive hunger the whole day.  The fiber in hemp seeds is the main reason for the help in weight loss.

Please Note: Side effects are not big with hemp seeds and not known to cause any effects with common medications.  The only place to be cautious with the seeds is if you take anticoagulants because they inhibit blood platelets and may cause a bleeding risk.  If you have concerns with any medications, check with your healthcare provider.

This superfood has a 3:1 balance of omega-3 and omega-6 fatty acids, which are good for heart health. They are an excellent protein containing all 20 amino acids and all of the nine essential amino acids necessary. Also, they have a good quantity of minerals such as manganese, magnesium, phosphorus, and zinc. Learn more about hemp seed nutrition.

So there you go lots of good reasons to eat this Superfood.

“Did you know that the Queen of England apparently beds her horses on hemp hurd? Hemp animal bedding is known for being extremely absorbent and helps cut down odours. Plus it’s not as dusty as other materials often used so respiratory health is improved, which is particularly important for thoroughbred horses.” ~Manitoba Harvest  (Hemp hurds are the woody inner parts of the hemp stalk.)

The average hemp field in Canada is about 160 acres, which is about 175 NFL football fields (not including the end zones). ~Manitoba Harvest

History (Hemp has a long history) 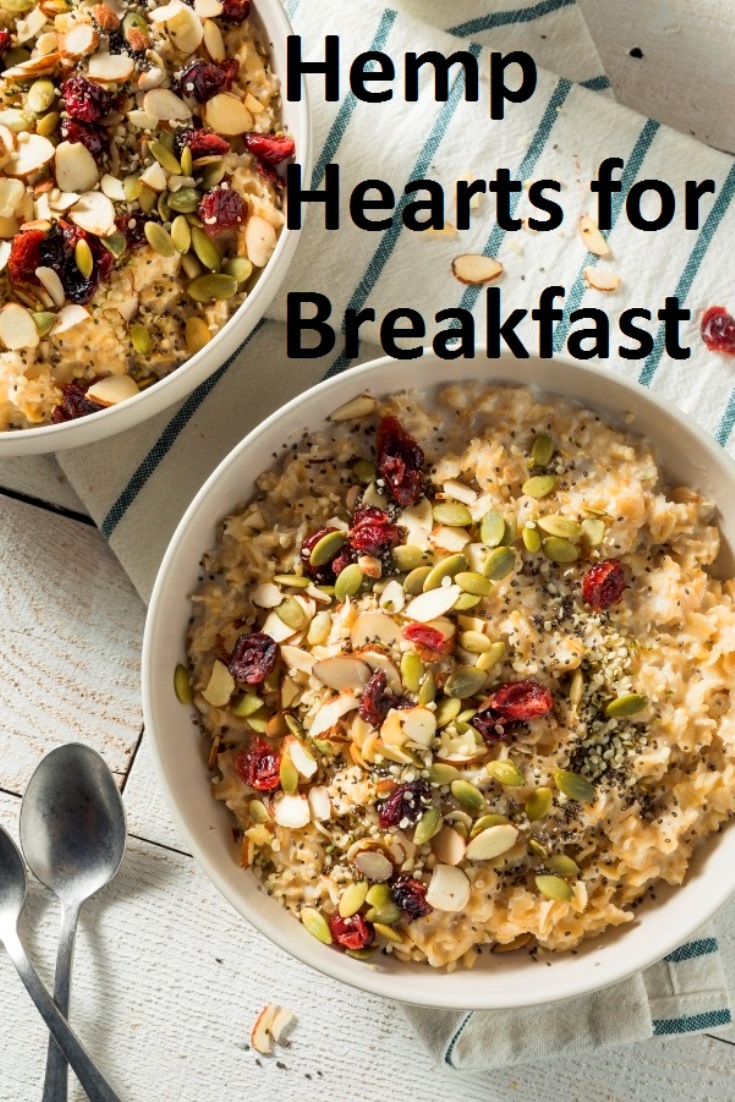 How to Select and Store

It is best to get organic hemp hearts. They are sensitive to light and heat, so it’s best to store them in a cool, dry place or in the fridge.

Here are the organic hemp hearts I get from Manitoba Harvest Hemp Hearts, you can get them from Amazon with that link.

“As an Amazon Associate, I earn from qualifying purchases.”

This is Their Description of Hemp Hearts:

10g Plant Protein per serving
• 12g Omegas 3 & 6 per serving
• Non-GMO Project Verified, Gluten-Free, Vegan, Kosher, Paleo, and Keto
• Manitoba Harvest Hemp Hearts are versatile super seeds that add plant protein and healthy fats to any snack or meal–sprinkle on salad, cereal, oatmeal, yogurt, blend in smoothies or incorporate into any of your favorite recipes
• More protein and omegas with fewer carbs than Chia or Flax seeds per serving
• At Manitoba Harvest, we believe in cultivating the world in which we want to live. As a Certified B-Corp with a net-zero carbon footprint, sustainability is at the forefront of everything we do

Add them to smoothies or grind them up and sprinkle them on your yogurt, a salad, cereal, pasta, or steamed vegetables. How to use them is endless.  It is good to make a hemp heart meal by grinding them to get all the nutrition from them. Because they are a seed, they can easily not get chewed up fully and just end up in your stools.

Hemp seed oil as finishing oil can be drizzled onto salads and pasta or other dishes.

Now here are some recipes to help you start getting Hemp Hearts into your diet:

Wild Blueberry Grain-Free Crumble is Tasty and Good for You – This is a delicious wild blueberry grain-free crumble meaning it is gluten-free too. It is a very healthy recipe and is also refined sugar-free.  What inspired this recipe was that my sister was coming for her birthday dinner and I wanted to have a very healthy dessert to serve.

Creamy Hemp Heart Milk Is Delicious and Nutritious – This hemp heart milk is made with hemp hearts which are the hemp seeds hulled. When I made this, I was very surprised at how quickly it was made and how creamy it was!

Sweet Wild Blueberry Keto Smoothie is Easy to Make  – I love this wild blueberry keto smoothie. It is perfect for a quick breakfast or makes a tasty afternoon snack. What makes it keto is that there are only a small amount of blueberries in it and all of the other ingredients are keto-friendly. I make it a little sweeter by adding a few drops of stevia to mine.

Vegan Hemp Heart Pesto is Nut Free and Delicious– This hemp heart pesto is vegan, nut-free and raw. It makes lunch or dinner extra delicious. Most pestos have cheese in them which doesn’t work for those of us who eat dairy-free.  I always make my pestos without the cheese. For some, it is best not to eat lots of nuts and this hemp heart pesto is perfect as the hemp hearts add the flavour and texture without the nuts.