Arugula with its aromatic, peppery flavour adds wonderful benefits and dimension to a salad and to your sex life too. It is also known by other names such as salad rocket, garden rocket, roquette, rucola, rugula, or colewort. The scientific name of arugula is Eruca sativa.

”Arugula is an elixir that gives flavor to life.”
– Dennis Lybeer

“The rocket excites the sexual desire of drowsy people.” – from a poem, by Virgil, one of Rome’s greatest poets.

Tips for eating or cooking to get the health benefits of arugula:

This green is popular in Italian cuisine.
Eating arugula raw will likely provide your body with more of the healthy isothiocyanates than eating cooked arugula.
Eating lightly cooked arugula, your body will absorb more of certain nutrients and carotenoids than when it is raw.

Please Note: Arugula is relatively lower in oxalate content than in spinach, purslane, mustard greens, celery, etc. The greens can be safely used during pregnancy and lactation. 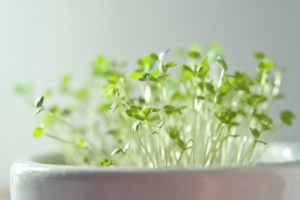 Grow Your Own Arugula At Home

Arugula’s well-known name as ‘rocket’ is because of its rocket-fast growth speed.

It’s easy to grow arugula as it is drought resistant, grows in dry disturbed soil and grows up fast in short period.

Simply sow the seeds in a sunny location approximately every 20 to 30 days from early spring to fall.

It does flower and goes to seed quickly. Collect seeds for growing more arugula.

Simply pick the young leaves and the plant will keep creating more leaves for months. The older leaves are a bit hotter. The flowers are great in salads.

How to Store Arugula

Put in a plastic or a zip lock bag and store in the fridge. They usually last up to one week.

My Favorite Arugula Recipes to Enjoy the Benefits

Quinoa Arugula Salad: Full of protein from the quinoa and pumpkin seeds, this can be a meal all by itself.