Do You Eat to Live or Do You Live to Eat? 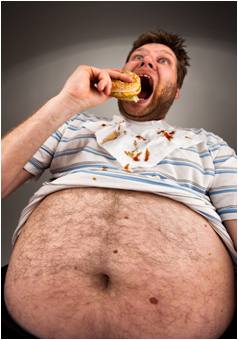 What primitive people ate was simple and similar to how animals naturally eat – one food at a time.  Birds have been seen to eat seeds at one time and insects at another.

This what animals do; they eat to live and what primitive people also did.  Then came the modern times of ‘eating for entertainment’ rather than ‘eating to live’ and refined foods were also introduced into the mix.  Now humans in the 21st century are so out of touch with what is natural eating that it takes discipline to get back to eating simply, naturally and combine foods properly.

“The animals in nature experience a much higher level of health than we do – not only by eating high-water content food; they are also properly combining their food. That’s the beauty of it. They eat one food at a time. We eat anything we can get our hands on, including them!  As you start experimenting with the proper combinations of food, you will come to realize first hand what a truly marvelous tool proper food combining is in the quest to lose weight.” (H. Diamond, Fit for Life 1985)

Going back to the natural way of eating of primitives got people thinking about the modern diet. This is how Paleo diet came into being.

What is a Paleo diet?

It is abbreviated from the Paleolithic diet.  That sounds primitive, doesn’t it? It is and is often referred to as the caveman diet or hunter-gatherer diet.  The Paleolithic era was a period of about 2.5 million years that ended around 10,000 years ago with the development of agriculture.

Here is a definition from MedicineNet:

“The Paleolithic diet is a weight loss plan based upon the premise of consuming only those foods available during the Paleolithic era (also known as the Stone Age). People at this time were hunter-gatherers, meaning that all animals were hunted and plants were gathered from nature. There was no domestication of animals or planting of crops for food. Milk products were also not consumed, except during the breastfeeding of infants. Although the diet of people in the Paleolithic Era varied by geographic region and availability of foods, most Paleolithic diets would have contained mostly meats, fruits, nuts, and vegetables with very little (or no) cereals, grains, or milk products.

The modern version of the Paleolithic diet would prohibit the consumption of foods such as sugar, dairy products, grains (including cereals, corn, bread, pasta), potatoes, beans, soybeans, and lentils. This diet today would be considered a form of high protein diet, which may pose health risks because high protein diets stress the consumption of meats and high protein foods that contain saturated fat and a high percentage of overall fat. According to the American Heart Association guidelines, adults who are trying to lose weight and keep it off should eat no more than 30 percent of total daily calories from fat and less than 7 percent from saturated fat, which is difficult or impossible with many high protein diets. High protein diets may also restrict the intake of important carbohydrates and low-fat dairy products.” http://www.medicinenet.com

The Paleo diet claims to be the healthiest way to eat which is not possible for anyone living in the 21st century.  It consists of foods that can are hunted (meats and seafood) or gathered (eggs, vegetables, fruit, roots, and nuts).  In my opinion, it is not the healthiest….it is another fad diet.  It excludes grains, legumes, and salt (Himalayan salt is very beneficial) which are healthy additions to our diet. It the strictest sense you would not even grow your own vegetables.  A diet full of that much meat is simply not healthy as we now know.  Let us not forget that primitive people had a much shorter life span then we do now.

It also excludes refined sugar, alcohol and processed oils which are simply good health choices.  To add to that no processed foods is preferable for a healthy diet.

I love that my meals are now naturally food combined like birds. My digestion is healthy and I have more energy from well-digested food. That is saying a lot since fibromyalgia had created havoc with my digestive system.  Once upon a time I could only eat 12 foods.  Now I eat anything I want.   I owe my healthy digestive system to Food Combining and Acid/Alkaline principle.

When you eat a diet that is Food Combined and Acid/Alkaline balance, pounds naturally drop off and weight is not easily gained.

Do You Want to Eat More Simply?

This will give you an intellectual understanding of the basics.
To really APPLY food combining to your life IN A SIMPLE WAY i suggest you take in my next Weekend Web BootCamp called:

This includes the powerful combination of food combining AND Acid-Alkaline balance. Integrating them together makes them actually easier to do and more powerful.

READ Acid Reflux: The Dangers and How to Lessen it With Diet – It is unfortunate that it is common for many to experience acid reflux. If you have ever felt something like a knife scraping out your chest area from inside you are perhaps one of the four in ten who experience acid reflux and its close cousin, heartburn.

Also, find out 5 Scary Food Secrets Manufacturers Don’t Want You to Know – as well as the 5 Foods to Eliminate From Your Diet