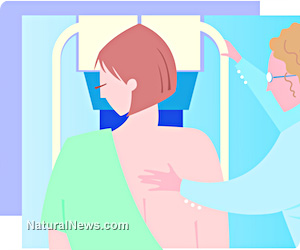 (NaturalNews) Mammograms are so widely used and promoted for breast cancer diagnosis that you would think it is very reliable. That, unfortunately, is far from the truth.

This means mammograms suggest women have cancer when in fact they do not.

In a Swedish study published in the British Medical Journal which involved 60,000 women aged 40 to 64, it was revealed that 70 percent of the 726 women referred to oncologists for treatment after mammograms did not actually have cancer.

According to an article published in The Lancet in July 1995, of the 5 percent of mammograms which suggested that further testing was necessary, up to 93 percent were actually false-positives. Another article in The Atlantic Monthly in June 1996 revealed that 70 to 80 percent of positive mammograms did not reveal any presence of cancer after biopsy.

Not accurate with denser breast tissue

Women under 40 generally have denser breast tissue, and this lowers the accuracy of mammograms. A study published in Radiology in 1991 estimated that 90 percent of the cases called back for further testing after mammograms could have been due to unclear readings arising from dense overlying breast tissue.

Partly because of its inability to effectively detect tumors in the presence of denser breast tissue, mammograms also have significant rates of false-negatives. This means that mammograms show “no cancer” when in fact the women do have the disease, and this shortcoming can prove fatal for many women.

Even for women aged 40 to 49, who have less dense breast tissue than younger women, the National Cancer Institute had in 1993 noted a high occurrence of “missed tumors” – about 40 percent of false-negatives.

Mammography’s accuracy is also affected by estrogen replacement therapy (ERT). A study on 8,800 postmenopausal women published in the Journal of the National Cancer Institute in 1996 found that ERT use led to a 71 percent higher chance of getting false-positives on mammograms. It also raised the likelihood of false-negatives.

Mammograms also may not detect advanced tumors which are less then 2cm in diameter, when a tumor of about 1cm can already be manually felt via self-examination. With proper training, women can find even smaller tumors.

A diagnostic tool like thermography can actually detect breast cancer tumors years before mammograms can.

Being slow to detect breast cancer is problematic because some women, e.g. those below 40, tend to have faster-growing tumors and their conditions could quickly worsen in-between screenings.

Putting everything together, it is no surprise that some research, including a recent large study which looked at 90,000 Canadian women for 25 years, have found that mammograms did not lower the overall death rate from breast cancer.

There are many doctors who feel mammograms are not effective at detecting breast tumors. With its many limitations relating to accuracy and potential harm – its radiation increases breast cancer risk and physical compression of breasts could trigger cancer spread – why are mammograms still so widely used?

Numerous experts say this is due to the politics and profits of the industry.

Dr. Russell Blaylock, an oncologist, brain surgeon and neuroscientist said that the “diagnostics are really not that accurate”, but “so much money is being made, and so much money has been invested in these units in hospitals, that no one wants to admit the truth.”

“If I were a woman I’d never have a mammogram,” he said.

Somers, Suzanne. Knockout: Interviews With Doctors Who Are Curing Cancer And How To Prevent Getting It In The First Place. NY, USA: Three Rivers Press, 2009. Print.