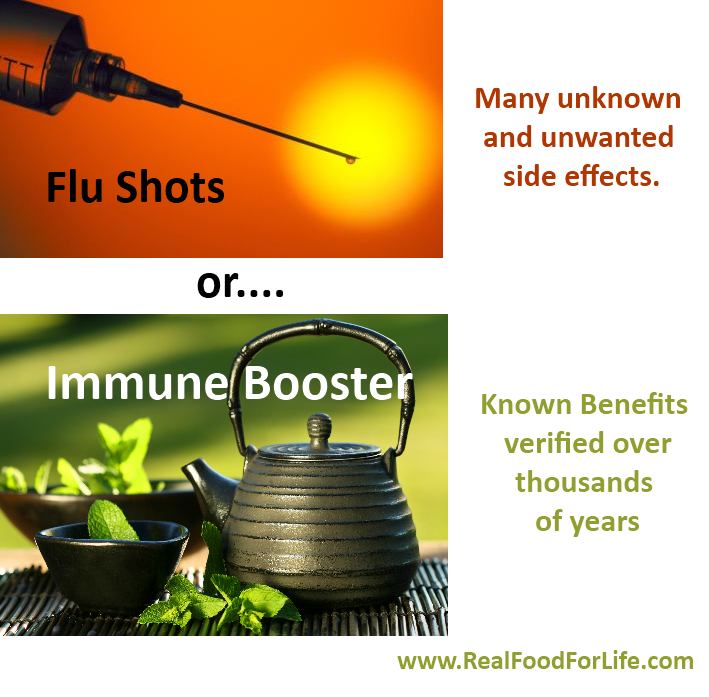 At this time of year, I am continuously hearing people talk about getting flu shots which concerns me as I read the disasters that occur every year.   Here are the headlines to see the stories below.  I know some of you have seen this before so please pass it on to your friends and family.

In the past I would get flues every year; usually 4 – 6 and one of them would lay me up for 7 to 10 days….every year.  Now flues are not a part of my everyday life and I do not get flu shots.

I am healthier than most people I know and am feeling stronger every year.

What do I do and recommend? First nourish and cleanse on a daily basis and for extra help consume the ancient formula Alpha20C that nourishes the immune system so that flues are not longer able to take hold in your system (see info below about it).

A Healthy Body does not need to get flu! ….and if it does let it run it’s course of cleansing your body and strengthening your immune system.

Most Flu Vaccines Contain Mercury
Flu season is right around the corner. Although the U.S. Centers for Disease Control and Prevention recommends that almost everyone, including pregnant women, get flu vaccinations, few of the 130 million people receiving this vaccination each year realize that most flu shots contain harmful dosages of mercury. About 80% of all flu shots distributed in the United States contain a mercury-based preservative called thimerosal. According to health officials, people getting flu-shots need to request a thimerosal-free vaccination. These vaccines cost roughly $4 more to manufacture and distribute. Learn more: http://www.organicconsumers.org/articles/article_8370.cfm

Man Paralyzed After Flu Shot!
Two weeks after his flu shot, Mr. Claman awoke with a pounding headache and a strange feeling in his feet. The doctor was reassuring, telling the 47-year-old businessman that the symptoms were probably related to stress.
His condition deteriorated, so he made his way to a hospital emergency room. His body was gradually going numb.

Doctors immediately recognized the tell-tale signs of Guillain Barre syndrome, a baffling, potentially fatal condition that resembles polio. By afternoon, Mr. Claman was completely paralyzed. He was placed in intensive care and put on a respirator. He spent the next eight months in hospital and now, a year after his flu shot, is just beginning to walk unassisted again.

“It’s been a harrowing experience,” Mr. Claman said in an interview. “Never in my wildest dreams — or maybe I should say nightmares — could I have imagined almost losing my life to the flu shot,” According to Health Canada, there have been 37 cases of GBS since 1987 where a link to the flu vaccine is suspected. But it cautions that because reporting is not mandatory, the number of cases is probably underreported and that because GBS occurs for a number of other reasons, it is often difficult to make a causal link.   For full story go to: http://www.vaclib.org/news/timeforflu.htm

A Teenage Girl, Confined to a Wheelchair for 15 years, Unable to Speak, Due to a Vaccine
It wasn’t until right after the little girl had received her third and final pertussis shot that all hell broke loose. One of five children in a Christian homeschooling family I know well, the child suffered an extreme and life-altering reaction to the common childhood vaccine. Today, perhaps 15 years later, her family’s life largely revolves around taking care of the now-teenage girl, confined to a wheelchair, unable to speak, her life decimated by a “required” vaccine shot. For full article got to: http://www.worldnetdaily.com/news/article.asp?ARTICLE_ID=56090
There is also a web site www.vaclib.org……..where there is a wealth of info.

Part of the Quinary.  This formula nourishes functions associated with the body’s resistance or capacity for immunity.

The herbs in Alpha 20C contain naturally occurring antioxidants and calcium.  Alpha 20 C gets it’s name from what it promotes: T-cells (the 20th letter of the Alphabet being ‘T’ and ‘C’ standing for cells.)  This food nourishes the immune system through the bone marrow, liver and adrenals.  Eaten throughout the day, along with Conco it promotes a strong immune response to environmental attacks.  Alpha 20C has a delicious “mocha” taste and can be eaten as is, or added to any Sunrider food.

In Ancient China, a similar formula was used to:
Build the Immune System

Emotional Balance: According to ancient Chinese writings, imbalances in the wood element seem to coincide with imbalances in anger. This might show up as crankiness, impatience, frustration, rudeness, edginess, arrogance, stubbornness, aggression, impulsiveness or explosive behaviour. Oddly enough, an anger imbalance might also appear in a person who never expresses any anger at all. So if you’re experiencing any of the above, just eat more Alpha 20C.

It is suggested that you start out with Quinary.  Individual formulas that nourish the individual systems may be added and eaten separately or can be eaten all together in Quinary capsules, powder or liqui-five.  For a weak system eat extra Alpha 20C: 10 capsules a day, for 10 days or longer, for dramatic results.  For serious health, challenges eat 1 tsp. Alpha 20 C from the bulk container three times a day.

This information is not intended to diagnose, treat, cure or prevent any disease.
It is just amazing food. 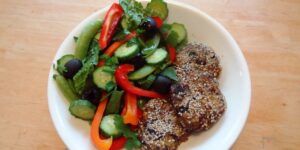 Tempeh Burgers are Vegan, Gluten-free and So Surprisingly Yummy 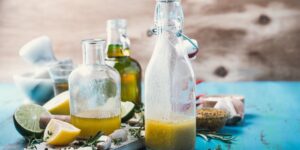