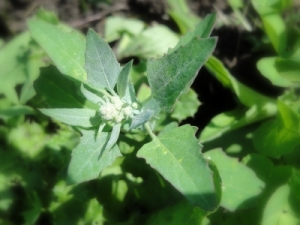 I’ve had an on /off  relationship with weeds recently (see Dandelion Madness) and now I’m at it again.

My attention has now gone to yet another weed called Lamb’s Quarters.

This one’s not so pesky to your lawn and it tastes much better.   Actually it tastes almost exactly like spinach – particularly when cooked – and again, it has all kinds of nutritional value and … it’s free.

You can also call it Fat Hen, Nickel Greens, pig weed, dung weed or White Goosefoot.  Some of these names I also don’t love.

Benefits and Facts about Lamb’s Quarters

It now grows wild in North America – and probably most people unknowingly just pull it out of the garden. You can recognize the plant when young because the center of the top is feathery looking with a purple tint. The picture is of a younger plant.

Caution:
Like every food and plant – there is no PERFECT food that is 100%  good. There is always some small (or big) aspect that is not good for the body.

That is why it is best to eat a large variety of foods and to know how to combine and prepare foods properly so that that negative effect is reduced.

Greens have such high levels of so many nutrients that it is not surprising that this particular green has its own particular problem .  This means you shouldn’t eat TOO much of it.  This is not likely considering how little people eat weeds but just so you know – it has high levels of oxalic acids in it.  Oxalic acid can bind with other minerals in the body causing mineral depletion and in its worse case – kidney stones.  Many foods contain this ingredient so if you are even relatively healthy there is not cause for concern.

A few raw cups of this thrown in your salad therefor is no problem – or even if you ate several cups cooked but if you were using it a lot over a long period of time than be aware.  If suddenly you are NOT attracted to eating it –  follow that advise from your body and take a vacation.  I personally liked it best when the plants were just big enough to have a head of green seeds. Seeds contain all the vitality of the whole plant.  When green and steamed they have a very delicate flavor. When they start to get brown they have a much stronger taste.

The season is getting along but I encourage you to find some young plants and try it out.  You may like it ……..and of course its free!

Another weed grows in my garden  in my garden even better than Lamb’s Quarters.  I won’t mention its many nutritional qualities now.

No this is really just a rant.

This name ‘Canadian Thistle’ is even more inappropriate than the previous weed. There is NOTHING Canadian about this weed. Canadians are polite and friendly and always saying ‘sorry’ and ‘eh’.

This weed doesn’t say anything even when it pricks you with its MILLIONS of prickles and overruns your garden. It can also be called the creeping thistle.

I am told that you can eat the leaves and the root. I tried and wrote about it in The Man Who Tired to Eat  Thistle.  If any of you have tried please let me know how it turns out!

I’d rather hear though, about some ingenious way to get rid of this (or make peace with it) since it is now my garden’s worse invader.

I used to think this weed was a ‘wimp’ because I could very easily weed whip it down from large patches around the farm. It has a large hollow stem so I could easily get cut away but now I am pulling up younger plants from my garden and it is the most difficult. Any suggestions?

P.S.  If you thought “Good Weed,  Bad Weed”  had anything to do with the consumption of illegal recreation substances then your head is definitely  in the 60’s!